EUR/USD Grinds Back Towards 1.0500 Support Ahead of ECB

- Will the Governing Council Keep the Door Open to Further Extend Its Asset-Purchases?

The European Central Bank (ECB) may generate a limited market reaction as President Mario Draghi and Co. are widely expected to retain the current policy, but the fresh batch of central bank rhetoric may spark near-term headwinds for the Euro should the Governing Council show a greater willingness to further extend its easing-cycle.

Why Is This Event Important:Even though the ECB is on course to reduce its its asset-purchases to EUR 60B/month starting in April, the Governing Council may continue to strike a dovish outlook for monetary policy as officials argue ‘headline inflation had increased recently, mainly owing to developments in energy prices.’ In turn, the central bank may increase its efforts to thwart a ‘taper tantrum’ and utilize the non-standard measures beyond December 2017 amid the ongoing weakness in underlying inflation.

The ongoing slack in the real economy accompanied by the slowdown in private-sector consumption may push the ECB to further support the monetary union, and the single currency stands at risk of facing additional headwinds in 2017 as the central bank struggles to achieve its one and only mandate for price stability.

However, the ECB may tame expectations for additional monetary support as key metrics suggest ‘the economic recovery was firming,’ and more of the same from the Governing Council may foster range-bound conditions for the euro-dollar exchange as market attention turns to the Federal Reserve’s March 15 interest rate decision. 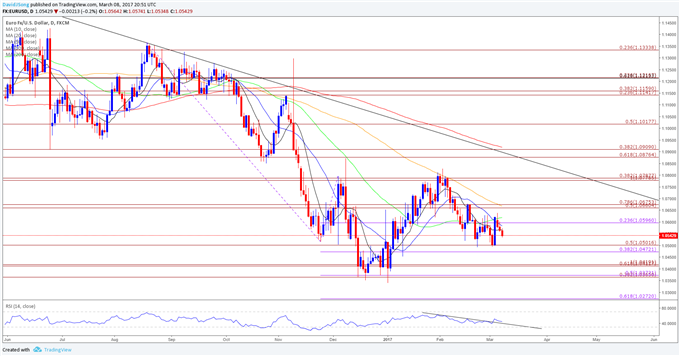 After extending the deadline for the quantitative easing (QE) program at the last meeting for 2016, the European Central Bank (ECB) largely endorsed a wait-and-see approach for monetary policy, with President Mario Draghi and Co. keeping the door open to further adjust its non-standard measures as the central bank plans to reduce its asset-purchases to €60B/month starting in April. The ECB continued to strike a dovish outlook, with the central bank warning ‘headline inflation has increased lately, largely owing to base effects in energy prices, but underlying inflation pressures remain subdued.’ The Euro struggled to hold its ground following the ECB rate decision, but the market reaction was short-lived, with EUR/USD ending the day at 1.0663.