- Reserve Bank of Australia (RBA) to Hold Official Cash Rate at Record-Low of 1.50%.

The Reserve Bank of Australia (RBA) interest rate decision may generate limited interest as Governor Philip Lowe and Co. are widely expected to keep the official cash rate at the record-low of 1.50%, but the fresh batch of central bank rhetoric may weigh on the AUD/USD exchange rate should the central bank highlight a dovish outlook for monetary policy.

The RBA may sound more cautious this time around as officials warn ‘the increase in consumption growth was expected to be limited given the forecast for subdued growth in household incomes,’ and Governor Lowe may show a greater willingness to further support the real economy as ‘the factors that had weighed on inflationary pressures could be more persistent than had been assumed.’ In turn, the RBA may continue to tame interest-rate expectations, with aussie-dollar at risk of giving back the advance from earlier this year especially as the Federal Reserve appears to be on course to deliver a March rate-hike.

Subdued wage growth accompanied by the slowdown in global trade encourage the RBA to adopt a more dovish tone in March, and the Australian dollar stands at risk of facing near-term headwind should the central bank open the door to further embark on its easing-cycle.

However, the ongoing improvement in the labor market may push the RBA to highlight an improved outlook for the region, and the policy statement may spark a bullish reaction in the higher-yielding currency should Governor Lowe & Co. talk down bets for additional monetary support. 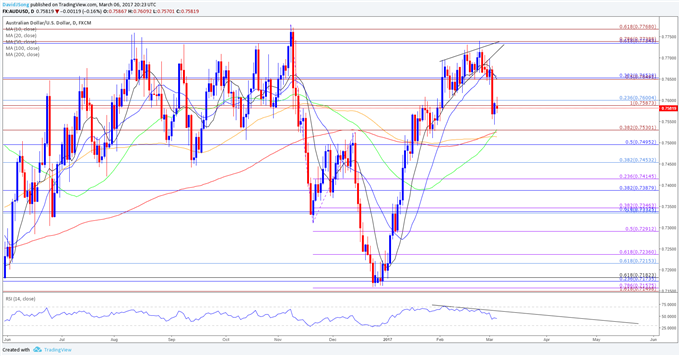 As expected, the Reserve Bank of Australia (RBA) held the benchmark interest rate at the record-low of 1.50%, but Governor Philip Lowe & Co. sounded a bit more optimistic this time around, with the central bank noting ‘the improvement in the global economy has contributed to higher commodity prices, which are providing a boost to Australia's national income.’ Nevertheless, it seems as though the RBA is in no rush to remove the accommodative policy stance as ‘the rise in underlying inflation expected to be a bit more gradual,’ and the central bank may largely endorse a wait-and-see approach throughout the year after delivering two rate-cuts in 2016. The Australian dollar tracked higher following the upbeat tone, but the market reaction was short-lived, with AUD/USD slipping back below the 0.7650 region to end the day at 0.7627.