- Employment Component Climbed to a Four-Month High of 54.7 in January..

The ISM Non-Manufacturing survey may spark a lackluster market reaction as the index is anticipated to hold steady at 56.5 in February, but a positive development may heighten the bullish sentiment surrounding the U.S. dollar as it fuels bets for a Fed rate-hike.

The recent batch of hawkish Fed rhetoric have moved interest-rate expectations, with Fed Fund Futures now pricing a greater than 70% probability for a March rate-hike, and the central bank may stay on course to implement higher borrowing-costs over the coming months especially as the U.S. economy approaches ‘full-employment.’ With that said, signs of stronger service-based activity may encourage Fed Chair Janet Yellen to join her colleagues and endorse a more hawkish outlook for monetary policy with the central bank head scheduled to speak ahead of the blackout period. However, a downtick in business sentiment may push Chair Yellen to tame interest rate expectations as ‘market-based measures of inflation compensation remain low; most survey-based measures of longer-term inflation expectations are little changed, on balance,’ and the central bank head may continue to promote a wait-and-see approach as ‘inflation moved up over the past year, mainly because of the diminishing effects of the earlier declines in energy prices and import prices.’

The pickup in household consumption may boost business sentiment as it remains one of the leading drivers of growth, and an unexpected uptick in the ISM survey may fuel the near-term decline in EUR/USD as it boosts bets for a March rate-hike.

Nevertheless, the slowdown in private-sector lending accompanied by the recent slump in building activity may drag on the U.S. service-sector, and a dismal ISM print may undermine the recent advance in the greenback as it dampens the outlook for growth and inflation. 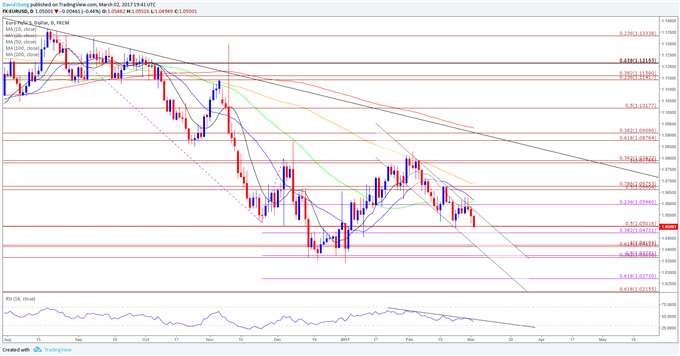 The ISM Non-Manufacturing survey narrowed more-than-expected in January, with the headline reading slipping to 56.5 from a revised 56.6 in December. A deeper look at the report showed the gauge for New Export Orders slipped below the 50 mark to post the first contraction since August, with New Orders slowing to 58.6 from 60.7 during the same period, while the Employment component advance to 54.7 from 52.7 in December. The mixed development failed to prop up the greenback, with EUR/USD edging higher throughout the day to close at 1.0785.