- Bank of Canada (BoC) Warns 4Q GDP Could Be ‘Slightly Stronger than Expected.’

With Canada’s growth rate projected to increase an annualized 2.0% in the last three-months of 2016, a slowdown in economic activity may fuel the near-term advance in the USD/CAD exchange rate as it encourages the Bank of Canada (BoC) to tame interest rate expectations.

Even though the Bank of Canada (BoC) argues ‘growth in the fourth quarter of 2016 may have been slightly stronger than expected,’ Governor Stephen Poloz and Co. appear to be in no rush to lift the benchmark interest rate from the record-low as ‘the Bank’s three measures of core inflation, taken together, continue to point to material excess capacity in the economy.’ With that said, the diverging paths for monetary policy may continue to instill a long-term bullish outlook for USD/CAD especially as Fed Fund Futures now show a greater than 60% probability for a March rate-hike.

Improved confidence accompanied by the ongoing improvement in the labor market may generate another better-than-expected GDP report, and a positive development may sway the BoC to drop its dovish tone over the coming months as signs of stronger growth boosts the outlook for inflation.

Nevertheless, rising input costs paired with the slowdown in private-sector consumption may drag on the growth rate, and a dismal GDP print may dampen the appeal of the Canadian dollar as it puts pressure on Governor Poloz to further support the real economy. 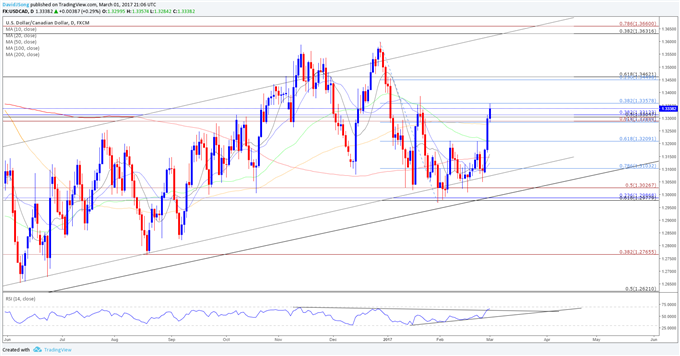 Canada avoid a technical recession in 2016, with the growth rate expanding an annualized 3.5% following a revised 1.3% contracting during the three-months through June. The rebound in economic activity was larger driven by a pickup in net-exports, with household consumption advancing 2.6% during the same period, while private-sector spending narrowed 1.3% followed the 5.3% expansion in the second-quarter. The market reaction to the GDP report was short-lived, with USD/CAD bouncing back from 1.3359 to end the day at 1.3437.