AUD/USD may extend the advance from earlier this week and target fresh 2017 over the next 24-hours of trade as Australia is expected to add another 10.0K jobs in January.

A further improvement in labor market dynamics may heighten the appeal of the Australia dollar as it encourages the Reserve Bank of Australia (RBA) to adopt an improved outlook for the region, and Governor Philip Lowe may show a greater willingness to gradually move away from the easing-cycle as ‘a return to reasonable growth is expected in the December quarter’ following the economic contraction during the three-months through September. In turn, signs of stronger growth may push the RBA to adopt a hawkish tone over the coming months, but the central bank appears to be in no rush to remove the record-low interest rate as ‘subdued growth in labour costs means that inflation is expected to remain low for some time.’

The record trade surplus accompanied by the pickup in business sentiment may generate another better-than-expected employment report, and a positive development may spark a bullish reaction in the Australian dollar as it boosts the outlook for growth and inflation.

However, easing consumption along with the slowdown in building activity may drag on job growth, and a dismal development may undermine the 2017 rally in AUD/USD as it puts pressure on the RBA to further support the real economy. 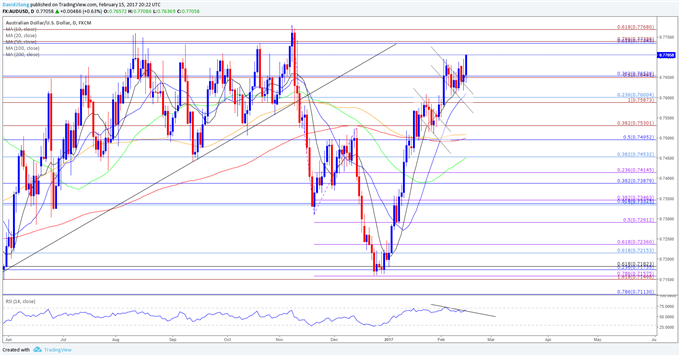 Check out the short-term technical levels that matter for AUD/USDheading into the release!

Australia added another 13.5K jobs in December following a 38.3K expansion the month prior, while the jobless rate unexpectedly climbed to an annualized 5.8% from 5.7% during the same period amid an uptick in the Labor Force Participation Rate. With discouraged workers returning to the labor force, a deeper look at the report showed full-time positions increased 9.3K in December, while part-time employment advanced 4.2K. The better-than-expected print failed to keep AUD/USD above the 0.7500 handle as the pair struggled to preserve the sharp advance from earlier in the week, but the move was short-lived, with the aussie-dollar closing the day at 0.7558.