- Core Rate of Inflation to Slow for First Time Since October.

A pickup in the U.S. Consumer Price Index (CPI) may heighten the appeal of the dollar as the Federal Open Market Committee (FOMC) appears to be on course to further normalize monetary policy in 2017, but a marked slowdown in the core rate of inflation may drag on interest rate expectations as the central bank persistently warns ‘market-based measures of inflation compensation remain low; most survey-based measures of longer-term inflation expectations are little changed, on balance.’

Recent comments from Fed Chair Janet Yellen suggests the committee may pay increased attention to the developments in the core rate of inflation as the central bank head argues ‘inflation moved up over the past year, mainly because of the diminishing effects of the earlier declines in energy prices and import prices,’ and the FOMC may continue to endorse a wait-and-see approach at its next interest rate decision on March 15 as ‘considerable uncertainty attends the economic outlook.’ With that said, signs of softening price growth may produce near-term headwinds for the greenback, but the dollar may continue to gain ground throughout 2017 as Fed Fund Futures continue to highlight a greater than 60% probability for a June rate-hike.

Waning demand for large ticket-items paired with the slowdown in private-sector lending may weigh on price growth, and a weaker-than-expected CPI print may spark a bearish reaction in the U.S. dollar as it drags on interest rate expectations.

Nevertheless, higher input costs accompanied by the pickup in business sentiment may fuel faster inflation, and a pickup in both the headline and core CPI may fuel the near-term advance in the greenback as it puts increased pressure on the FOMC to raise the benchmark interest rate sooner rather than later. 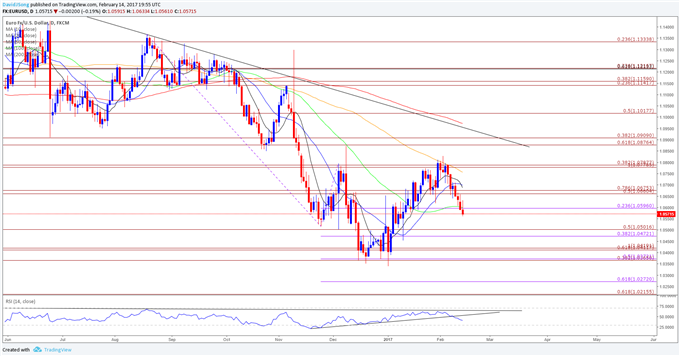 Impact that the U.S. CPI reporthas had on EUR/USD during the previous release

The U.S. Consumer Price Index (CPI) climbed an annualized 2.1% in December following a 1.7% expansion the month prior, with the core rate of inflation also advancing to 2.2% from 2.1% during the same period. The breakdown of the report showed the pickup was largely driven by a 1.5% rise in energy prices, with transportation costs also advancing 1.0% during the same period, while prices for apparel slipping another 0.7% after contracting 0.5% in November. Despite the better-than-expected print, the greenback struggled to hold its ground, with EUR/USD pushing towards the 1.0700 handle, but the advance was short-lived as the pair ended the day at 1.0629.