- Core Rate of Inflation to Pick Up for Third Straight Month; 1.7% Marks Highest Reading Since August 2014.

A further pickup in the U.K.’s Consumer Price Index (CPI) may fuel a larger recovery in GBP/USD as it puts increased pressure on the Bank of England (BoE) to move away from its highly accommodative policy stance.

Heightening price pressures in the U.K. may push the Monetary Policy Committee (MPC) to adopt a more hawkish outlook as board member Kristen Forbeswarns the central bank may have toact on the inflation-overshoot ‘even if it means reversing recent adjustments.’ In turn, Governor Mark Carney and Co. may continue to change their tune over the coming months, but it seems as though the central bank is in no rush to move away from its easing-cycle as officials reiterate ‘monetary policy can respond, in either direction, to changes to the economic outlook as they unfold to ensure a sustainable return of inflation to the 2% target.’

The pickup in private-sector activity accompanied by the ongoing improvement in labor market dynamics may generate a stronger-than-expected CPI print, and another expansion in the headline as well as core rate of inflation may spark a bullish reaction in sterling as it boosts interest rate expectations.

However, dwindling sales paired with the slowdown in private-sector lending may encourage U.K. firms to offer discounted prices, and a lackluster inflation report may produce a limited reaction and keep the broader outlook for sterling tilted to the downside as the BoE anticipates ‘a projected path of inflation that is similar to the one expected in November, despite the stronger growth outlook.’ 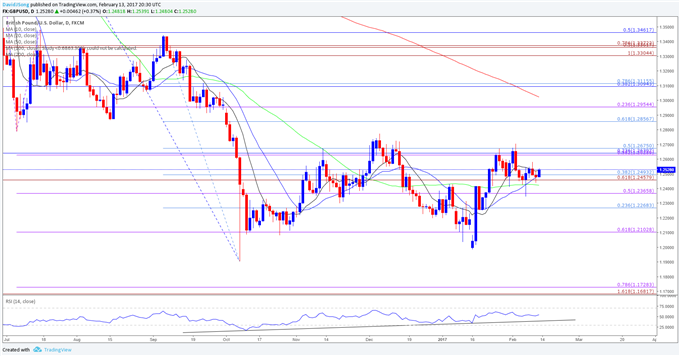 The U.K. Consumer Price Index (CPI) climbed to 1.6% per annum after expanding an annualized 1.2% in November, while the core rate of inflation unexpectedly advanced 1.6% during the same period amid forecasts for a 1.4% print. A deeper look at the report showed prices for clothing and footwear pick up for the second consecutive month in December, with transportation costs rising an annualized 3.7% during the same period, while prices for food & beverages narrowed another 1.1% after contracting 2.0% in November. Despite the limited market reaction to the better-than-expected CPI report, the British Pound gained ground after Prime Minister Theresa May outlined plans for a parliament-vote on the EU referendum, with GBP/USD closing the day at 1.2417.