EUR/USD to Inch Towards December High on Lackluster NFP Report

- Unemployment Rate to Hold Steady at Annualized 4.7%, Average Hourly Earnings to Slow to 2.8%.

Mixed expectations surrounding the U.S. Non-Farm Payrolls (NFP) report may generate a choppy market reaction as the economy is projected to add 175K jobs in January, while wage growth is anticipated to slow from the fastest pace of growth since 2009. Nevertheless, with Fed Fund Futures still pricing a greater than 60% for a June rate-hike, a series of positive developments may heighten the appeal of the greenback as the Federal Reserve appears to be on course to further normalize monetary policy in 2017.

Indeed, the recent rhetoric from the Federal Open Market Committee (FOMC) suggests the central banks is in no rush to implement higher borrowing-costs as inflation continues to run below the 2% target, and another batch of lackluster data prints may produce near-term headwinds for the greenback as it dampens bets for a March rate-hike. In turn, the Fed may try to tame market expectations and buy more time as officials warn ‘market-based measures of inflation compensation remain low; most survey-based measures of longer-term inflation expectations are little changed, on balance,’ but signs of stronger job/wage growth may heighten the appeal of the U.S. dollar as it puts increased pressure on Chair Janet Yellen and Co. to raise the benchmark interest rate sooner rather than later.

Improved confidence accompanied by the pickup in business outputs may generate a better-than-expected NFP report, and a positive development may trigger a bullish reaction in the U.S. dollar as it boosts interest rate expectations.

Nevertheless, the slowdown in private-sector consumption may drag on job/wage growth, and a weakening outlook for the U.S. labor market may spur losses for the greenback as it encourages the Federal Reserve to delay its normalization cycle. 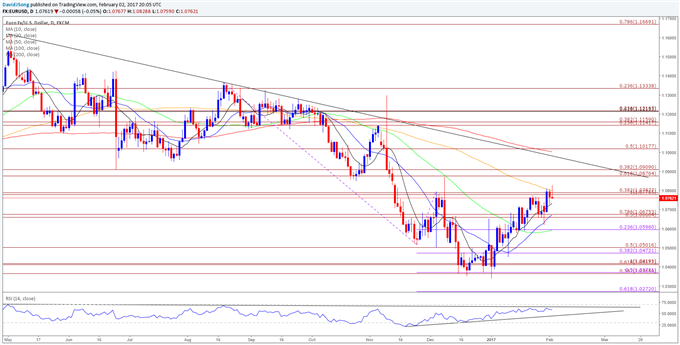 U.S. Non-Farm Payrolls (NFP) increased 156K in December following a revised 204K expansion the month prior, while the jobless rate climbed to an annualized 4.7% from 4.6% during the same period amid an uptick in the Labor Force Participation Rate. At the same time, Average Hourly Earnings grew 2.9% per annum to mark the fastest pace of growth since 2009, and the ongoing improvement in labor market dynamics may keep the Federal Reserve on course to further normalize monetary policy in 2017 as Chair Janet Yellen sees the central bank ‘closing in’ on its dual mandate. Despite the slew of mixed data prints, the U.S. dollar gained ground following the pickup up in wage growth, with EUR/USD pushing below the 1.0550 region to end the day at 1.0532.

Technical Weekly: Is USD/CHF the Tell?Gold Prices Back Below 1200- Here’s the Game Plan