- Will the BoE Reduce Its Forecasts for Growth & Inflation?

Fresh projections coming out of the Bank of England (BoE) may shake up the near-term outlook for the British Pound and undermine the recent recovery in GBP/USD should Governor Mark Carney and Co. curb their outlook for growth and inflation.

Fresh forecasts from BoE officials may highlight 'a slightly lower path for inflation than envisaged in the November Inflation Report’ as the central bank continues to assess sterling’s effect on U.K. price growth, and the Monetary Policy Committee (MPC) may stick to the highly accommodative policy stance throughout 2017 especially as the U.K. prepares to depart from the European Union (EU). Nevertheless, Governor Carney may stress ‘there are limits to the extent to which above-target inflation can be tolerated’ as the central bank anticipates a notable increase in price growth, and an unexpected upward revision in the quarterly inflation report (QIR) may fuel a larger recovery in GBP/USD as it boosts interest rate expectations.

The downtick in household spending accompanied by the slowdown in private-sector lending may push the BoE to adopt a more cautious outlook for the U.K. economy, and the sterling stands at risk of facing near-term headwinds should central bank officials show a greater willingness to further embark on the easing-cycle.

However, signs of stronger-than-expected growth paired with the pickup in U.K. wage growth may encourage the MPC to adopt a more hawkish outlook for monetary policy, and an unexpected upward revision to the quarterly inflation report may heighten the appeal of sterling as market participants scale back bets for additional monetary support. 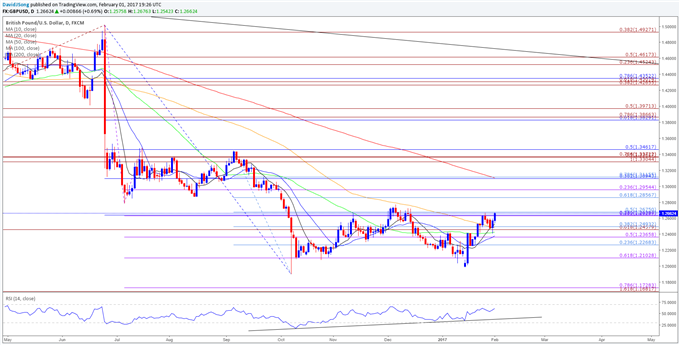 As expected, the Bank of England (BoE) kept the benchmark interest rate at the record-low of 0.25% at its last interest rate decision for the year, with the central bank largely endorsing a wait-and-see approach going into 2017 as officials reiterate ‘monetary policy can respond, in either direction, to changes to the economic outlook as they unfold to ensure a sustainable return of inflation to the 2% target.’ Nevertheless, Governor Mark Carney and Co. warned the current data prints points to a ‘a slightly lower path for inflation than envisaged in the November Inflation Report,’ but it seems as though the central bank is in no rush to further embark on its easing cycle as the Monetary Policy Committee (MPC) argues ‘there are limits to the extent to which above-target inflation can be tolerated.’ More of the same from the BoE sparked a lackluster reaction in GBP/USD, with sterling edging lower throughout the North American trade as the pair ended the day at 1.2415.