The Federal Open Market Committee (FOMC) is expected to retain the current policy after delivering a 25bp rate-hike at the last interest rate decision for 2016, but fresh batch of comments from Chair Janet Yellen and Co. may heighten the appeal of the U.S. dollar as the central bank appears to be on course to further normalize monetary policy over the coming months.

Why Is This Event Important:It seems as though the FOMC will sit sidelines during the first-half of 2017 as officials wait for further details on the Trump administration’s economic agenda, but the majority may continue to endorse two to three rate-hikes for 2017 as most members ‘anticipate that inflation would rise to 2 percent over the medium term as the transitory effects of declines in energy and import prices dissipated and the labor market strengthened further.’ In turn, Fed Fund Futures may continue reflect market expectations for a June rate-hike, and the committee may reiterate‘gradual adjustments in the stance of monetary policy would be appropriate’ as Chair Yellen sees the central bank ‘closing in’ on its dual mandate.

Sticky price growth accompanied by signs of stronger household earnings may encourage the FOMC to adopt a more hawkish outlook for monetary policy, and the fresh comments may heighten the appeal of the greenback should Fed officials adopt an improved outlook for the U.S. economy.

Nevertheless, easing job growth along with the slowdown in private-sector consumption may push Fed officials to endorse a more dovish tone this time around, and the dollar may struggle to hold its ground should the policy statement talk down bets for a June rate-hike. 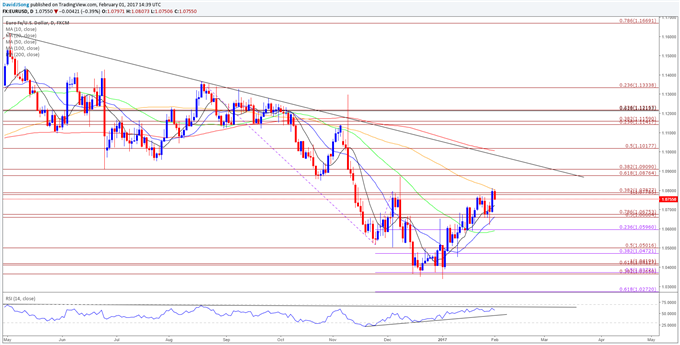 The Federal Open Market Committee (FOMC) raised the benchmark interest rate by 25bp to a fresh target range of 0.50% to 0.75%, with the majority of central bank officials projecting two to three rate-hikes for 2017. As the central bank reiterates ‘inflation is expected to rise to 2 percent over the medium term as the transitory effects of past declines in energy and import prices dissipate and the labor market strengthens further,’ it seems as though Chair Janet Yellen and Co. will stay on course to implement higher borrowing-costs over the coming months, but the central bank looks poised to reestablish its wait-and-see approach at the start of 2017 amid the uncertainty surrounding the fiscal outlook. The U.S. dollar rallied against its major counterparts following the Fed rate-hike, with EUR/USD pushing below the 1.0600 handle to end the day at 1.0533.