- Will the Governing Council Keep the Door Open to Further Embark on Its Easing-Cycle?

Even though the European Central Bank (ECB) is widely anticipated to retain the status quo at the first interest rate decision for 2017, the fresh rhetoric from President Mario Draghi and Co. may shake up the near-term outlook for EUR/USD especially as the Governing Council is on course to reduce the asset-purchase program starting in April.

With the ECB scheduled to narrow its asset-purchases to EUR 60B/month later this year, the Governing Council may adopt a more neutral tone and attempt to walk a fine line in an effort to stem the threat for a ‘taper tantrum.’ With that said, more of the same from ECB officials may generate a limited market reaction, but the Euro remains at risk of facing headwinds throughout 2017 as the central bank keeps the door open to further support the monetary union.

The ongoing weakness in business investment paired with the slowdown in household consumption may encourage the ECB to endorse a dovish outlook for monetary policy, and the single-currency may struggle to preserve the rebound from earlier this month should the central bank show a greater willingness to retain the non-standard measures beyond December 2017.

Nevertheless, the pickup in private-sector lending paired with signs of stronger price growth may spark a rift within the ECB, and the central bank may tame expectations for additional monetary support amid the ballooning balance sheet. 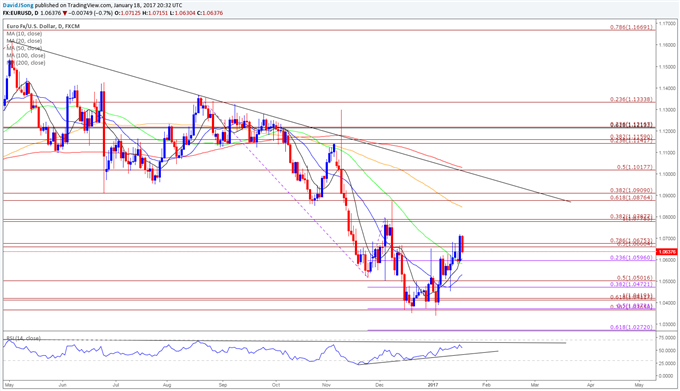 Check out the short-term technical levels that matter for EUR/USD heading into the meeting!

The European Central Bank (ECB) increased its efforts to support the monetary union, with the Governing Council extending the deadline for the quantitative easing (QE) program to December 2017, but announced plans to curb its asset-purchase program over the coming months. The ECB noted that ‘from April 2017, the net asset purchases are intended to continue at a monthly pace of €60 billion until the end of December 2017, or beyond, if necessary,’ and President Mario Draghi may keep the door open to further embark on the easing-cycle as the central bank struggles to achieve the 2% target for inflation. The Euro struggled to hold its ground following the policy adjustments, with EUR/USD slipping below the 1.0700 handle to end the day at 1.0611.