A 175K rise in U.S. Non-Farm Payrolls (NFP) may boost the appeal of the greenback and undermine the near-term recovery in EUR/USD as it puts increased pressure on the Federal Open Market Committee (FOMC) to further normalize monetary policy in 2017.

After voting unanimously to raise the benchmark interest rate at the December 14 meeting, Chair Janet Yellen and Co. appear to be on course to implement higher borrowing-costs as the central bank warns ‘if the labor market appeared to be tightening significantly more than expected, it might become necessary to adjust the Committee's communications about the expected path of the federal funds rate, consistent with the possibility that a less gradual pace of increases could become appropriate.’ Indeed, a further improvement in labor market dynamics may prompt central bank officials to adopt a more hawkish outlook for monetary policy, but the 2017-rotation within the FOMC may push the committee to endorse a wait-and-see approach at the February 1 interest rate decision as officials argue ‘market-based measures of inflation compensation had moved up considerably but still were low; most survey-based measures of longer-term inflation expectations were little changed on balance.’

Increased outputs paired with the improvement in business confidence may fuel a further pickup in U.S. employment, and a positive development may generate a bullish reaction in the greenback as it puts increased pressure on the FOMC to further normalize policy in 2017.

Nevertheless, the rise in planned job-cuts accompanied by the slowdown in household spending may drag on the labor market, and a weaker-than-expected NFP print may keep the dollar under pressure as it weighs on interest-rate expectations. 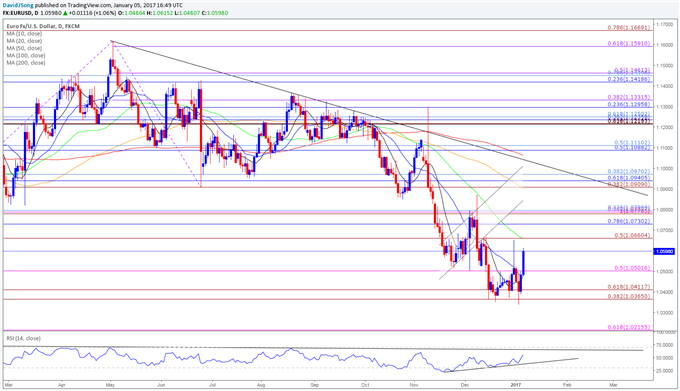 The U.S. economy added another 178K jobs in November following a 142K expansion the month prior, while the Unemployment Rate unexpectedly narrowed to an annualized 4.6% from 4.9% during the same period as the Labor Force Participation Rate slipped to 62.7% from 62.8% in October. At the same time, Average Hourly Earnings slowed to an annualized 2.5% from 2.8%, but the Federal Reserve appears to be on course to further normalize monetary policy over the coming months as ‘the Committee judges that the case for an increase in the federal funds rate has continued to strengthen.’ The slew of mixed data prints sparked a lackluster market reaction in the greenback, with EUR/USD edging higher ahead of the weekend to end the day at 1.0657.