Even though the Bank of England (BoE) is widely expected to retain the current policy at its last interest-rate decision for 2016, hawkish rhetoric from Governor Mark Carney and Co. may generate a larger relief rally in GBP/USD as central bank officials warn ‘there are limits to the extent to which above-target inflation can be tolerated.’

The Monetary Policy Committee (MPC) is likely to endorse a wait-and-see approach going into 2017 as recent ‘data suggest that the near-term outlook for activity is stronger than expected three months ago,’ and the central bank may continue to talk down expectations for additional monetary support as officials expect inflation to exceed the 2% target over the policy horizon. Nevertheless, more of the same from the BoE may lead to a lackluster reaction especially as the U.K.’s departure from the European Union (EU) clouds the outlook for growth and inflation.

Stronger consumption accompanied by the pickup in price growth may push the BoE to adopt a more hawkish tone ahead of 2017, and the British Pound may further recoup the losses following the U.K. Referendum in June should the central bank continue to change its tune over the coming months.

However, the BoE may cast a more cautious outlook this time around amid easing job growth paired with slowing outputs, and GBP/USD may struggle to retain the rebound following the British Pound ‘flash crash’ should the fresh comments drag on interest rate expectations. 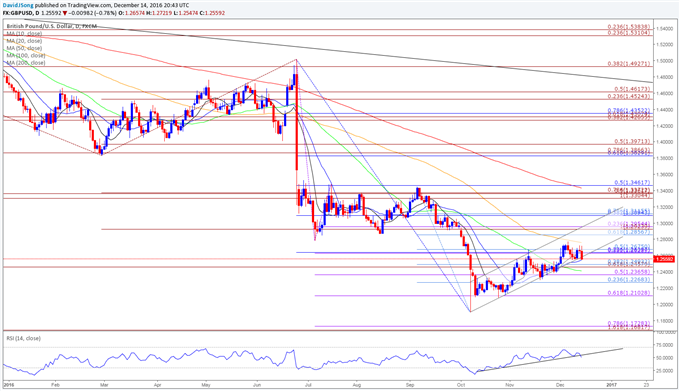 The Bank of England (BoE) kept the benchmark interest rate on hold at 0.25% while maintaining its asset-purchase program at GBP 435B, and the central bank appears to be in no rush to further embark on its easing-cycle as Governor Mark Carney and Co. warn ‘monetary policy can respond, in either direction, to changes to the economic outlook as they unfold to ensure a sustainable return of inflation to the 2% target.’ The recent comments suggest the Monetary Policy Committee (MPC) will carry the current policy into 2017 as U.K. price growth is expected ‘to rise to a rate above the 2% target, for an extended period, as a result of the depreciation of sterling that had accompanied the referendum result,’ and the central bank may continue to talk down expectations for additional monetary support as ‘there are limits to the extent to which above-target inflation can be tolerated.’ The shift in central bank rhetoric propped up the British Pound, with GBP/USD advancing from 1.2422 to end the day at 1.2459.