- Core Rate of Inflation to Rebound to Annualized 1.3% in November.

A rebound in the U.K. Consumer Price Index (CPI) may fuel a largerGBP/USD relief rally ahead of the Bank of England’s (BoE) last interest rate decision for 2016 as heightening price pressures dampen speculation for additional monetary support.

Evidence of stronger price growth may push the BoE to adopt a more hawkish tone ahead of 2017 as Governor Mark Carney and Co. continue to warn ‘there are limits to the extent to which above-target inflation can be tolerated,’ and the central bank may gradually move away from its easing-cycle over the coming months as officials warn ‘monetary policy can respond, in either direction, to changes to the economic outlook as they unfold to ensure a sustainable return of inflation to the 2% target.’ However, another slowdown in the CPI may curb the recent recovery in GBP/USD, and the Monetary Policy Committee (MPC) may have little choice but to further insulate the real economy as the U.K. prepare to depart from the European Union (EU).

Higher wages accompanied by the pickup in private-sector spending may encourage U.K. firms to raise consumer prices, and a marked rebound in the headline and core rate of inflation may trigger a bullish reaction in the sterling as it boosts interest-rate expectations.

Nevertheless, waning confidence paired with the concerns surrounding ‘Brexit’ may drag on price growth, and another dismal CPI report may weigh on the exchange rate as it puts increased pressure on the BoE to further embark on its easing-cycle. 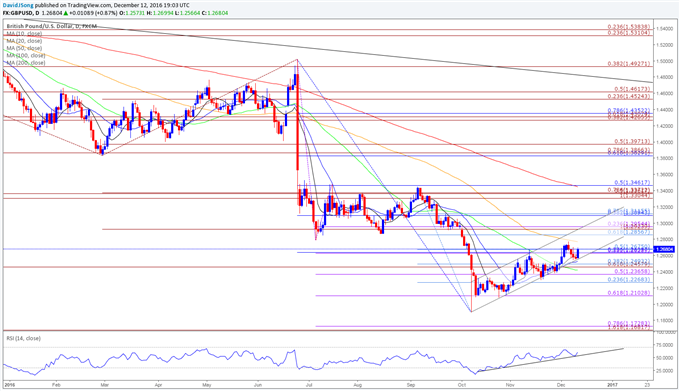 The U.K. Consumer Price Index (CPI) unexpectedly slowed to an annualized 0.9% in October after expanding 1.0% during the previous month, while the core rate of inflation slipped to 1.2% per annum from 1.5% during the same period. A deeper look at the report showed the cost for food & beverages narrowed 2.4% per annum to lead the slowdown, with prices for clothing & footwear slipping an annualized 0.7%, while transportation costs increased 2.3% after expanding 1.2% in September. The British Pound struggled to hold its ground following the disappointing figures, but the market reaction was short-lived, with GBP/USD bouncing back from the 1.2400 region to end the day at 1.2455.