The Reserve Bank of Australia (RBA) is widely expected to keep the official cash rate at the record-low of 1.50% at the last policy meeting for 2016, and more of the same from Governor Philip Lowe and Co. may fuel the near-term rebound in AUD/USD as the central bank appears to be gradually moving away from its easing-cycle.

It seems as though the RBA will carry its current policy into 2017 and may shift its stance over the coming months as the central bank sees the economy ‘growing at a moderate rate.’ In turn, the Australian dollar may stage a larger recovery should the fresh batch of central bank rhetoric boost interest-rate expectation. However, a more dovish tone from Governor Lowe may drag on the exchange rate and instill a bearish outlook for the higher-yielding currency should the central bank sound more cautious this time around.

The RBA may continue to talk down bets for additional monetary support amid the ongoing expansion in private-sector lending accompanied by the pickup in household consumption, and the policy statement may spark a bullish reaction in the Australian dollar should the central bank may adopt an improved outlook for the region.

Nevertheless, waning job growth paired with the slowdown in building activity may become a growing concern for the central bank, and the aussie-dollar stands at risk of giving back the advance from the December low (0.7369) should the RBA keep the door open to further support the real economy. 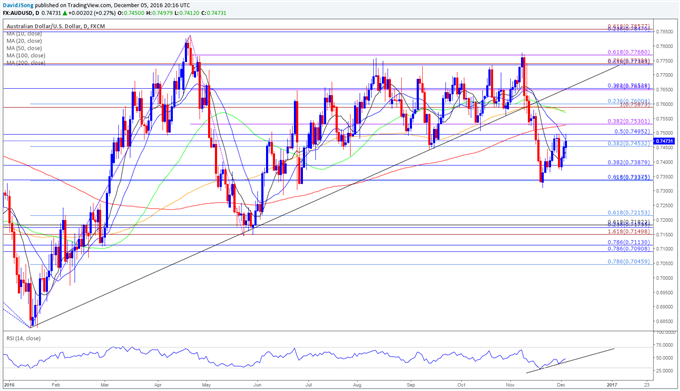 After keeping the benchmark interest rate unchanged at 1.50% in November, the Reserve Bank of Australia (RBA) continued to endorse a wait-and-see approach for monetary policy as ‘the economy is forecast to grow at close to its potential rate, before gradually strengthening.’ Moreover, Governor Philip Lowe and Co. argued ‘inflation is expected to pick up gradually over the next two years’ as the rate-cuts from earlier this year continue to work their way through the real economy, and it seems as though the RBA will carry the current stance into 2017 as the central bank appears to be approaching the end of its easing-cycle. The Australian dollar popped higher following the RBA rate-decision, with AUD/USD advancing from 0.7615 to end the day at 0.7650.

S&P 500: Will the Market Respect Support This Week?