- Employment Component Recovered in October with Index Advancing to 52.9 from 49.7.

EUR/USD stands at risk of extending the decline from earlier this week as the ISM Manufacturing survey is expected to highlight an improved outlook for the U.S. economy, with the index projected to increase to 52.4 from 51.9 in October.

Even though the Federal Open Market Committee (FOMC) is widely anticipated to deliver a December rate-hike, data prints pointing to stronger growth may encourage the central bank to further normalize monetary policy in early-2017 especially as the ‘Committee judges that the case for an increase in the federal funds rate has continued to strengthen.’ However, the permanent-voting members appear to be in no rush to implement higher borrowing-costs as Fed Governor Jerome Powell argues the central bank should ‘should downplay short-term tactical questions such as the timing of the next rate increase, and should focus the public's attention instead on the considerations that go into making policy across the range of plausible paths for the economy.'

The pickup in private-sector consumption – one of the leading drivers of growth and inflation – may push U.S. firms to boost production, and another uptick in business sentiment may trigger a bullish reaction in the dollar as it fuels bets for higher interest rates.

Nevertheless, narrowing inventories accompanied by the slowdown in global trade may drag on the ISM survey, and a dismal development may weigh on the greenback should the data print curb interest-rate expectations. 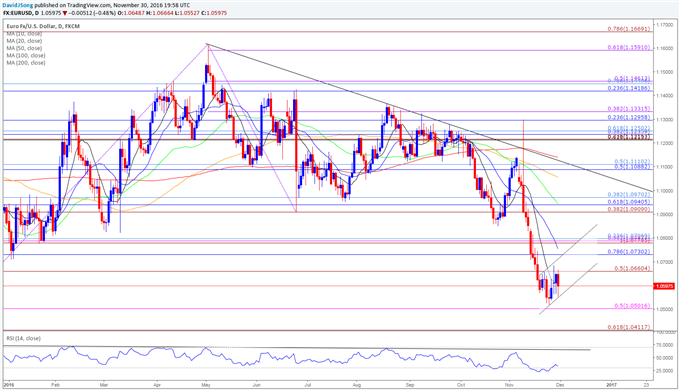 The U.S. ISM Manufacturing survey continued to pick up in October, with the index advancing to 51.9 from 51.5 in September. A deeper look at the report showed the Employment component advancing to 52.9 from 49.7 in September, with the gauge for Prices Paid climbing to 54.5 from 53.0, while the proxy for New Orders narrowed to 52.1 from 55.1 during the same period. Despite the limited market reaction, the greenback struggled to hold its ground during the North American trade, with EUR/USD ending the day at 1.1055.