- Will the Bank of Canada (BoC) No Longer ‘Actively’ Discuss Additional Monetary Support?

Canada’s 3Q Gross Domestic Product (GDP) report is anticipated to show the economy expanding an annualized 3.4% following a 1.6% contraction during the three-months through June, and a marked rebound in the growth rate may foster a larger pullback in USD/CAD as it dampens speculation for additional monetary support.

The BoC looks poised to carry its current policy into 2017 as ‘Canada’s economy is still expected to grow at a rate above potential starting in the second half of 2016,’ and Governor Stephen Poloz and Co. may show a greater willingness to gradually move away from its easing-cycle as the region remains ‘supported by accommodative monetary and financial conditions and federal fiscal measures.’ However, a dismal development may drag on the Canadian dollar and push the BoC to further insulate the real economy in 2017 as the central bank warns the ‘profile for growth in Canada is now lower than projected in July’s Monetary Policy Report (MPR).’

The pickup in private-sector consumption accompanied by the ongoing improvement in the labor market may encourage a stronger-than-expected GDP print, and the dollar-loonie may continue to pare the advance from earlier this month should the report boost interest-rate expectations.

Nevertheless, the widening trade deficit paired with the slowdown in building activity may drag on the growth rate, and a dismal GDP figure may produce near-term headwinds for the loonie as it fuels bets for additional monetary support. 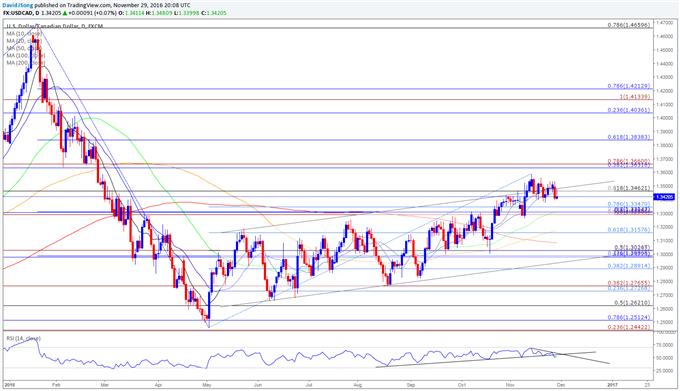 Economic activity in Canada contracted an annualized 1.6% after expanding a revised 2.5% during the first three-months of 2016 as wildfires in Alberta sparked the largest slowdown since 2009. Despite the dismal print, the backward-looking data may have a limited impact on the monetary policy outlook as the Bank of Canada (BoC) appears to be in no rush to cut the benchmark interest rate from the record-low of 0.50%, and the central bank may largely endorses a wait-and-see approach over the remainder of the year. The Canadian dollar edged lower following the weaker-than-expected GDP print, but the market reaction was short-lived, with USD/CAD pulling back from 1.3146 to end the day at 1.3103.