- Canada Retail Sales to Increase for First Time Since April.

- Will a Rebound in Household Consumption Push the BoC to Keep Rates on Hold in December?

A 0.6% rebound in Canada Retail Sales may spark a bullish reaction in the loonie and lead to a near-term pullback in USD/CAD should the data print highlight an improved outlook for growth and inflation.

Even though the Bank of Canada (BoC) keeps the door open to further embark on its easing-cycle, a marked pickup in household spending may encourage Governor Stephen Poloz and Co. to retain the current policy at the last 2016-meeting on December 7 as ‘Canada’s economy is still expected to grow at a rate above potential starting in the second half of 2016, supported by accommodative monetary and financial conditions and federal fiscal measures.’ Nevertheless, another disappointing sales report may push the BoC to ‘actively’ discuss additional measures in 2017 as the region is expected to return to full-capacity ‘materially later than the Bank had anticipated in July.’

The pickup in job growth accompanied by signs of a stronger-than-expected recovery may spur a meaningful rebound in household spending, and a positive development may fuel a near-term correction in USD/CAD as market participants scale back bets for additional monetary support.

However, sticky price growth paired with the slowdown in private-sector credit may weigh on consumption, and another dismal sales report may continue to cast a bearish outlook for the Canadian dollar as it drags on interest-rate expectations. 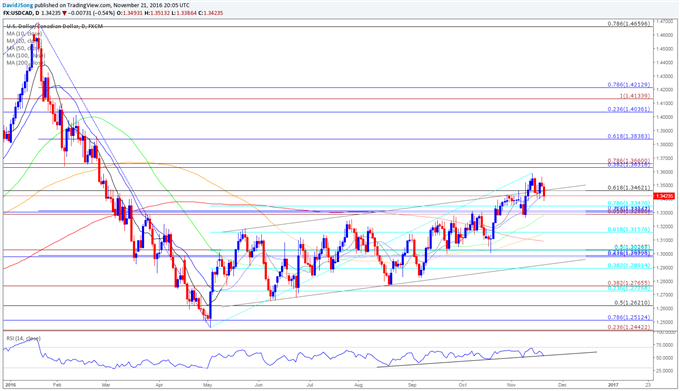 Household spending in Canada unexpectedly slipped another 0.1% in August after contraction a revised 0.2% the month prior, while separate report showed the Consumer Price Index (CPI) advancing an annualized 1.3% in September amid projections for a 1.4% print. The details of the report showed discretionary spending on clothing & accessories fell 0.5%, with demand for motor vehicles & parts narrowing 0.5% as well, while gasoline receipts increased 0.5% during the same period. The Canadian dollar sold-off following the series of disappointing data prints, with USD/CAD climbing above the 1.3300 handle to end the day at 1.3333.