- Core Rate of Inflation to Hold Steady at Annualized 1.8% for Third Consecutive Month.

Another uptick in Canada’s Consumer Price Index (CPI) along with stickiness in the core rate of inflation may foster a larger pullback in USD/CAD as the Bank of Canada (BoC) ‘expects total CPI inflation to be close to 2 percent from early 2017 onwards.’

Even though the BoC ‘actively’ discussed more stimulus for the real economy, it seems as though Governor Stephen Poloz and Co. will continue to endorse a wait-and-see approach for monetary policy as ‘Canada’s economy is still expected to grow at a rate above potential starting in the second half of 2016.’ The risk of overshooting the 2% target for inflation may push the BoC to gradually move away from its easing-cycle, but signs of subdued price growth may encourage the central bank to further support the real economy as the region is anticipated to return to ‘full capacity around mid-2018, materially later than the Bank had anticipated in July.’

The pickup in business confidence paired with the ongoing improvement in the labor market may fuel faster price growth in Canada, and a positive development may boost the appeal of the Canadian dollar as market participants scale back bets for another round of monetary stimulus.

Nevertheless, easing input-costs accompanied by the slowdown in private-sector consumption may push Canadian firms to offer discounted prices, and a softer-than-expected inflation report may spark a bearish reaction in the loonie as it puts increased pressure on the BoC to further embark on its easing-cycle. 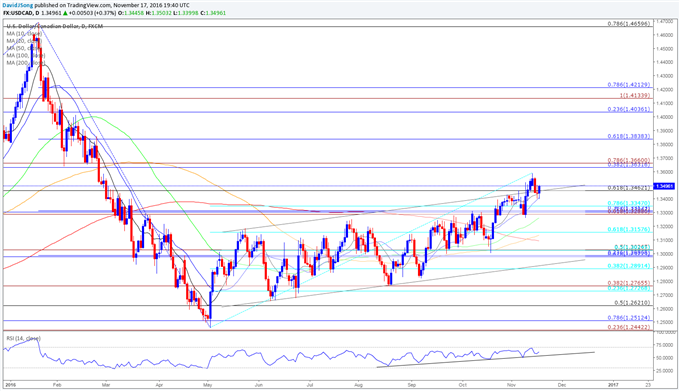 Canada’s Consumer Price Index (CPI) climbed an annualized 1.3% in September following a 1.1% expansion the month prior, while the core rate of inflation held steady at an annualized 1.8% for the second consecutive month. The weakness was largely driven by a 1.3% decline in the cost for food, while prices for clothing & footwear increased another 3.4% following the 1.1% expansion in August, with gasoline prices rebounding 0.8% during the same period. The Canadian dollar sold off following the softer-than-expected inflation report, with USD/CAD climbing above the 1.3300 handle to end the day at 1.3333.