- Household Earnings to Climb an Annualized 2.4% (Fastest Pace of Growth Since September 2015).

GBP/USD may continue to carve a near-term series of lower highs & lows as U.K. Jobless Claims are projected to increase another 2.0K in October, but a marked pickup in household earnings may heighten the appeal of the British Pound as the Bank of England (BoE) warns ‘monetary policy can respond, in either direction.’

It seems as though the Monetary Policy Committee (MPC) is gradually move away from its easing cycle as Governor Mark Carney warns ‘inflation is going up. A pass through of a 20% fall in sterling is going to come and will build towards the end of this year and into 2017,’ and the sterling may stage a larger recovery over the near-term as BoE officials argue that ‘there are limits to the extent to which above-target inflation can be tolerated,’ Nevertheless, the MPC appears to be in no rush to remove the highly accommodative stance as the outlook for the U.K. economy remains clouded with high uncertainty, and the British Pound remains at risk of facing headwinds over the coming months as the region prepares to depart from the European Union (EU).

Waning demand at home and abroad may push U.K. firms to scale back on hiring, and a dismal employment report may trigger a bearish reaction in the sterling as it dampens the outlook for growth and inflation.

Nevertheless, the pickup in business output accompanied by the expansion in building activity may foster a further improvement in job/wage growth, and a positive development may encourage a larger relief rally in GBP/USD as market participants scale back bets for additional monetary support. 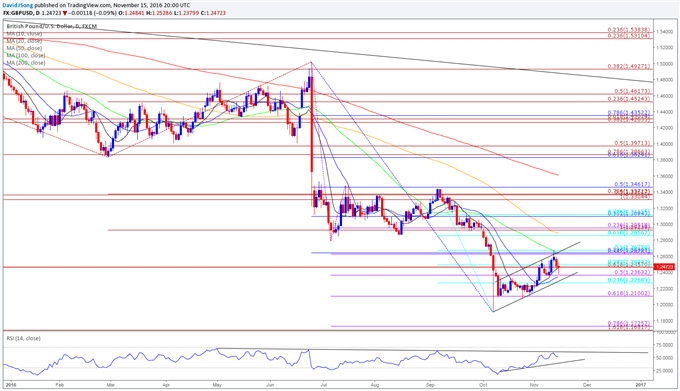 Claims for unemployment benefits increased 0.7K September after rising a revised 7.1K the month prior, while Average Weekly Earnings excluding Bonuses climbed an annualized 2.3% during the three-months through August after expanding 2.2% in the previous month. A deeper look at the report showed the U.K. economy added 106K jobs amid forecasts for a 76K rise, and the underlying strength in the labor market may encourage the Bank of England (BoE) to retain the current policy throughout the remainder of 2016 as Governor Mark Carney and Co. see a greater threat of overshooting the 2% target for inflation over the policy horizon. Despite the limited market reaction, the British Pound struggled to hold its ground throughout the session, with GBP/USD closing the day at 1.2283.