- Unemployment Rate to Narrow to Annualized 4.9%; Average Hourly Earnings to Hold at 2.6%.

A 175K expansion in U.S. Non-Farm Payrolls (NFP) accompanied by a downtick in the jobless-rate may heighten the appeal of the greenback and spark a near-term pullback in EUR/USD should the report fuel speculation for an imminent Fed rate-hike.

Despite the 8 to 2 split within the Federal Open Market Committee (FOMC), Chair Janet Yellen and Co. appear to be following a similar path to 2015 as officials warn ‘that the case for an increase in the federal funds rate has continued to strengthen,’ and the dollar may outperform its major counterparts over the remainder of the year as the central bank takes a more collective approach in preparing U.S. households and businesses for higher borrowing-costs. However, a further reduction in the Fed’s long-run interest rate forecast may curtail the bullish outlook for the greenback as the committee argues ‘market-based measures of inflation compensation have moved up but remain low; most survey-based measures of longer-term inflation expectations are little changed, on balance, in recent months,’ and the permanent-voting members may continue to endorse a ‘gradual’ path in normalizing monetary policy as the central bank remains ‘data-dependent.’

The pickup in private-sector consumption – one of the leading drivers of growth and inflation – may generate a strong employment report, and a positive development may trigger a bullish reaction in the U.S. dollar as it boosts bets for a December Fed rate-hike.

However, fading business confidence paired with the slowdown in service-based activity may drag on job/wage growth, and another dismal NFP release may fuel the near-term advance in EUR/USD as it drags on interest-rate expectations. 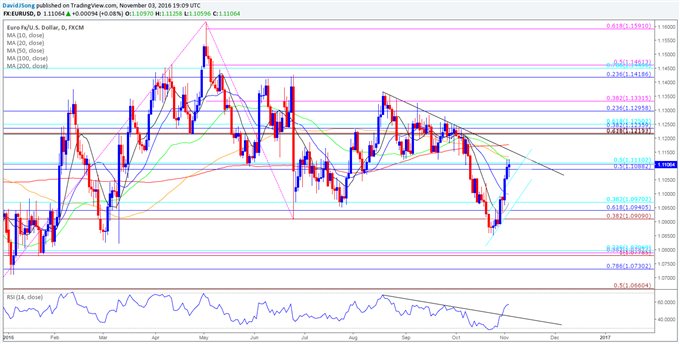 Check out the short-term technical levels that matter for the U.S. Dollar Index (DXY) heading into the report!

U.S employment increased another 156K in September following a revised 167K expansion the month prior, while the jobless rate unexpectedly climbed to an annualized 5.0% from 4.9% as the Labor Force Participation Rate advanced to 62.9% from 62.8% during the same period. At the same time, Average Hourly Earnings climbed 2.6% per annum after rising 2.4% in August, and the pickup in wage growth may encourage the Federal Open Market Committee (FOMC) to implement a 2016 rate-hike especially as the economy approaches ‘full-employment.’ Nevertheless, the weaker-than-expected report dragged on the dollar, with EUR/USD bouncing back from 1.1117 to end the day at 1.1195.