- Will the Permanent Voting-Members Continue to Endorse a Wait-and-See Approach?

The Federal Open Market Committee (FOMC) is widely expected to keep the benchmark interest rate on hold in November, but a growing dissent within the central bank may heighten the appeal of the greenback and spark a near-term pullback in EUR/USD as it fuels bets for an imminent rate-hike.

The FOMC appears to be following a similar path to 2015 as central bank officials boost their efforts in preparing U.S. households and businesses for higher borrowing-costs, and the dollar may stage a near-term rally following the rate-decision should the fresh developments fuel expectations for a December rate-hike. However, another 7 to 3 split may undermine the bullish sentiment surrounding the greenback as the permanent voting-members remain in no rush to further normalize monetary policy, and more of the same from the committee may spark a bearish reaction in the dollar as it drags on interest-rate expectations.

Signs of sticky price growth paired with the pickup in economic activity may spur a greater dissent within the FOMC, and the near-term rebound in EUR/USD may unravel over the days ahead should the fresh batch of central bank rhetoric fuel expectations for an imminent rate-hike.

However, waning confidence accompanied by the slowdown in job-growth may push the Federal Reserve to buy more time, and more of the same from Chair Janet Yellen and Co. may trigger a bearish reaction in the greenback as it drags on the interest-rate outlook. 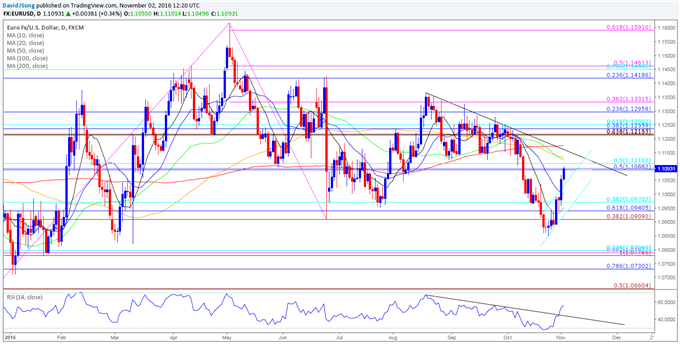 The Federal Open Market Committee (FOMC) voted 7 to 3 in September to retain the current policy, with Cleveland Fed President Loretta Mester and Boston Fed President Eric Rosengren joining Kansas City Fed President Esther George in the push for 25bp rate-hike. Nevertheless, the majority continued to endorse a wait-and-see approach for monetary policy as ‘market-based measures of inflation compensation remain low; most survey-based measures of longer-term inflation expectations are little changed, on balance, in recent months,’ with central bank officials lowering the long-run interest rate forecast to 2.9% from 3.0%, and the U.S. dollar stands at risk of facing headwinds over the remainder of the year should the Fed further delay its normalization cycle. The U.S. dollar struggled to hold its ground following the rate-decision, with EUR/USD bouncing back from 1.1134 to end the day at 1.1184.