- Will BoE Officials See a Greater Risk of ‘Inflation Overshoot’ Amid the Depreciation in the Sterling?

The Bank of England (BoE) is widely anticipated to retain the current policy in November, but the fresh updates coming out of the central bank may produce increased volatility in GBP/USD as Governor Mark Carney and Co. keep the door open to further embark on its easing-cycle.

With the economic outlook for the U.K. clouded with high uncertainty, the Monetary Policy Committee (MPC) is likely to reiterate that ‘a majority of members expect to support a further cut in Bank Rate to its effective lower bound,’ and the longer-term outlook for the sterling remains tilted to the downside as the new governor under Prime Minister Theresa May prepare to leave the European Union (EU). However, the BoE may largely endorse a wait-and-see approach going into 2017 as the sharp depreciation in the British Pound heightens the risk of overshooting the 2% target for inflation, and GBP/USD may stage a relief rally following the ‘Super Thursday’ event should the central bank talk down expectations for an imminent rate-cut.

Heightening price pressures accompanied by signs of a stronger-than-expected recovery may encourage the BoE to carry the current policy into 2017, and an upward revision in the inflation forecast may spark a larger rebound in the pound-dollar as market participants push out bets for lower borrowing-costs.

Nevertheless, the MPC may stay committed in further supporting the real economy amid the downside risks the growth outlook, and more of the same from Governor Carney and Co. may drag on the sterling as the central bank pushes monetary policy into unchartered territory. 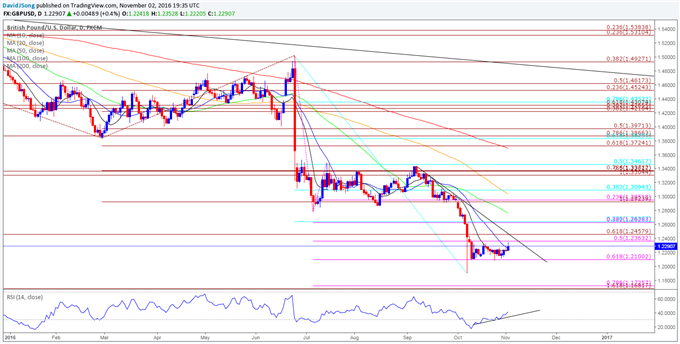 Check out the short-term technical levels that matter for GBP/JPY heading into the policy meeting!

The Bank of England (BoE) voted unanimously to retain the current policy in October, but kept the door open to further embark on its easing cycle, with the central bank reiterating that ‘a majority of members expect to support a further cut in Bank Rate to its effective lower bound.’ Indeed, the Monetary Policy Committee (MPC) may take additional steps to support the real economy especially as the U.K. prepares to depart from the European Union (EU), but Governor Mark Carney and Co. may largely endorse a wait-and-see approach throughout the remainder of the year as the central bank sees a growing threat of overshooting the 2% target for inflation. More of the same out of the BoE sparked a limited reaction in the British Pound, with GBP/USD bouncing back from the 1.3200 handle to end the day at 1.3236.