The Reserve Bank of Australia (RBA) is widely expected to keep the benchmark interest rate at the record-low of 1.50% in November, but the fresh batch of central bank rhetoric may fuel the near-term rebound in AUD/USD should the central bank endorse a wait-and-see approach for monetary policy.

More of the same from Governor Philip Lowe and Co. may boost the appeal of the higher-yielding currency as officials appear to be in no rush to further support the real economy, and the Australian dollar may outperform against its major counterparts over the remainder of the year should the central bank show a greater willingness to gradually move away from its easing-cycle. However, the ‘lower than average pace’ of global growth may push the RBA to further assist with the rebalancing of the real economy, and comments pointing to additional monetary support may undermine the near-term outlook for AUD/USD as the pair appears to be stuck in a broader holding pattern.

Signs of sticky price growth paired with the pickup in household consumption may keep the RBA on the sidelines, and the Australian dollar may try to stage a larger rebound over the days ahead should the central bank soften the dovish outlook for monetary policy.

Nevertheless, easing job growth accompanied by the slowdown in private-sector lending may push Governor Lowe to adopt a more cautious tone, and the aussie-dollar stands at risk of giving back the advance from the October low (0.7506) should the RBA keep the door open to further embark on its easing-cycle. 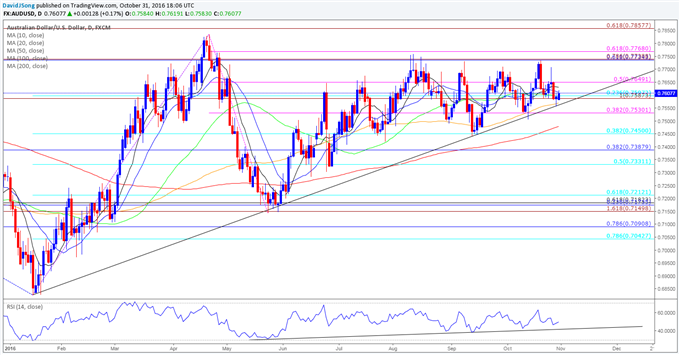 Check out the short-term technical levels that matter for AUD/USD heading into the policy meeting!

The Reserve Bank of Australia (RBA) kept the official cash rate (OCR) at the record-low of 1.50%, with the central bank largely reiterating a wait-and-see approach for monetary policy as the economy continues to grow at a ‘moderate’ pace. At the same time, Governor Philip Lowe and Co. warned that the low-inflation environment is likely to ‘remain the case for some time’ on the back of weak wage growth, but it seems as though the central bank will preserve the current policy throughout the remainder of the year as ‘forward-looking indicators point to continued expansion in employment in the near term.’ The Australian dollar struggled to hold its ground following the cautious comments from the RBA, with AUD/USD slipping below the 0.7675 area to end the day at 0.7617.