The U.S. economy is projected to grow an annualized 2.5% in the third-quarter of 2016, and a marked pickup in the Gross Domestic Product (GDP) may boost the appeal of the greenback and trigger a near-term decline in EUR/USD as it fuels speculation for an imminent Fed rate-hike.

It seems as though the Federal Open Market Committee (FOMC) is following a similar path to 2015 as a growing number of central bank officials endorse a December rate-hike, but the majority may continue to endorse a ‘gradual’ path in normalizing monetary policy as ‘survey-based measures of longer-run inflation expectations were little changed, on balance, while market-based measures of inflation compensation remained low.’ With that said, a marked slowdown in the core Personal Consumption Expenditure (PCE), the Fed’s preferred gauge for inflation, may spark a bearish reaction in the greenback as it drags on interest-rate expectations.

The pickup in household consumption accompanied by the expansion in private-sector credit may generate a better-than-expected GDP report, and a signs of a stronger recovery may fuel the near-term advance in the U.S. dollar amid the Fed remains on course to remove its highly accommodative policy stance.

However, waning business confidence paired with the slowdown in employment may weigh on the growth rate, and a dismal development may push Fed officials to further reduce the long-run interest-rate forecast as the central bank remains ‘data dependent.’ 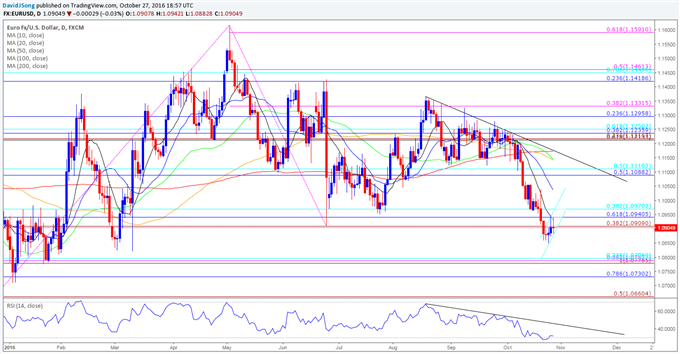 Impact that the U.S. GDP reporthas had on EUR/USD during the last quarter

The 2Q U.S. Gross Domestic Product (GDP) report showed the growth rate increasing an annualized 1.2% following a revised 0.8% expansion during the first-three months of the year, while Personal Consumption climbed 4.2% during the same period amid forecasts for a 4.4% print. At the same time, the core Personal Consumption Expenditure (PCE), the Fed’s preferred gauge for inflation, narrowed to an annualized 1.7% from a revised 2.1%, and easing price pressures may push the Federal Open Market Committee (FOMC) to follow as similar path to 2015 as the central bank remains ‘data dependent.’ The greenback struggled to hold its ground following the weaker-than-expected GDP report, with EUR/USD climbing above the 1.1150 zone to end the day at 1.1166.]