- Will Signs of Better-Than-Expected Growth Keep the Bank of England (BoE) on the Sidelines?

GBP/USD may stage a larger rebound over the next 24-hours of trade as the advance Gross Domestic Product (GDP) report is expected to show the U.K. economy expanding another annualized 2.1% in the third-quarter of 2016, and signs of better-than-expected growth may encourage the Bank of England (BoE) to retain the current policy throughout the remainder of the year as the central bank sees growing risk of overshooting the 2% target for inflation.

The BoE may continue to embark on its easing-cycle over the coming months as ‘a majority of members expect to support a further cut in Bank Rate to its effective lower bound,’ but Governor Mark Carney and Co. may largely endorse a wait-and-see approach going into 2017 as central bank officials warn the next quarterly inflation due out on November 3 will reflect the sharp decline in the exchange rate. Even though the threat of a ‘hard Brexit’ instills a long-term bearish outlook for the British Pound, GBP/USD may face a larger correction over the days ahead especially as the BoE appears to be in no rush to implement lower borrowing-costs.

The ongoing improvement in the labor market accompanied by the pickup in private-sector lending may foster a strong GDP report, and a positive development may spark a bullish reaction in the British Pound as market participants push out bets for a BoE rate-cut.

However, easing demand from home and abroad may drag on the growth rate, and a smaller-than-expected expansion in economic activity may undermine the recent rebound in GBP/USD as it puts increased pressure on the Monetary Policy Committee (MPC) to further support the real economy. 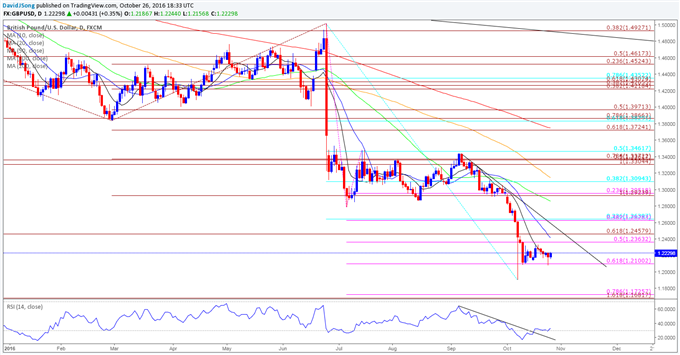 Impact that the U.K. GDP report has had on GBP during the last quarter

The U.K. economy grew an annualized 2.2% in the second-quarter of 2016 after expanding 2.0% during the first-three months of the year, but the longer-term outlook remains clouded with high uncertainty as the region prepares to depart from the European Union (EU). In response to the ‘Brexit’ vote, the Bank of England (BoE) looks poised to reestablish its easing cycle as the new government under Prime Minister Theresa May appear to be on course to trigger Article 50 of the Lisbon Treaty over the coming months. GBP/USD edged lower throughout the European trade even though the GDP report exceeded market expectations, but the weakness was short-lived, with the pair bouncing back from 1.3072 to end the day at 1.3220.