- Core Rate of Inflation to Hold Steady at Annualized 1.7% for Third Consecutive Quarter.

A pickup in Australia’s Consumer Price Index (CPI) accompanied by stickiness in the core rate of inflation may bolster the near-term outlook for AUD/USD as it dampens market speculation for additional monetary support.

Signs of sticky price growth may encourage the Reserve Bank of Australia (RBA) to preserve the current policy throughout the remainder of the year, and Governor Philip Lowe may largely endorse a wait-and-see approach going into 2017 as the economy continues to ‘grow at a moderate rate.’ However, a dismal CPI print may fuel bets for another 2016 rate-cut as the RBA expects the low-inflation environment to ‘remain the case for some time,’ and the central bank may increase its efforts to weaken the local currency as ‘an appreciating exchange rate could complicate’ the rebalancing of the real economy.

The uptick in business confidence paired with the pickup in private-sector consumption may boost consumer prices, and signs of stronger inflation may trigger a bullish reaction in the Australian dollar as it provides the RBA with greater scope to move away from its easing cycle.

However, easing job growth along with the slowdown in private lending may drag on the headline as well as the core rate of inflation, and a dismal development may curb the appeal of the higher-yielding currency as it fuels bets for lower borrowing-costs. 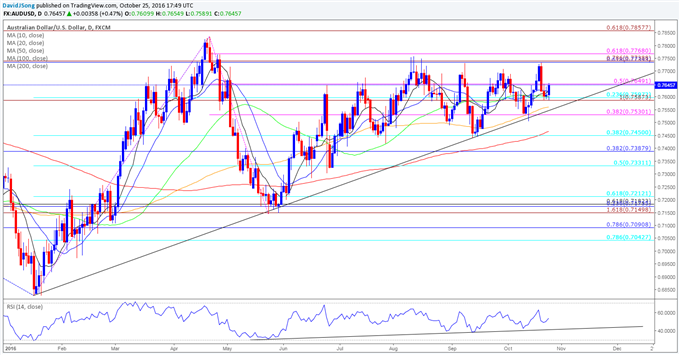 Australia’s Consumer Price Index (CPI) slowed more-than-expected in the second-quarter, with the headline reading narrowing to an annualized 1.0% from 1.3% during the first three-months of the year, while the core rate of inflation unexpectedly held steady at annualized 1.7% for the second straight quarter. In turn, the Reserve Bank of Australia (RBA) may come under increased pressure to further embark on its easing cycle as the central bank struggles to achieve the 2 to 3 percent target-band for inflation. The Australian dollar struggled to hold its ground following the weaker-than-expected CPI print, with AUD/USD slipping below the 0.7500 handle to end the day at 0.7489.