- U.K. Consumer Price Index (CPI) to Pick Up for First Time Since June.

- Core Inflation to Climb to Annualized 1.4% After Holding Steady at 1.3% in August.

A material pickup in both the headline and core U.K. Consumer Price Index (CPI) may sap the bearish sentiment surrounding the British Pound and spark a larger recovery in GBP/USD especially as a growing number of Bank of England (BoE) officials see a greater threat of overshooting the 2% target for inflation.

Even though the BoE argues ‘a majority of members expect to support a further cut in Bank Rate to its effective lower bound,’ heightening price pressures may keep the Monetary Policy Committee (MPC) on the sidelines throughout the remainder of the yearas Deputy Governor Jon Cunliffe warns the next quarterly inflation due out on November 3 will reflect the sharp decline in the exchange rate. In turn, GBP/USD may face a more meaningful correction as the BoE looks poised to endorse a wait-and-see approach ahead of 2017, but the broader outlook for the sterling remains tilted to the downside as the risk of a ‘hard Brexit’ clouds the outlook for growth and inflation.

Improved business confidence paired with the expansion in private-sector credit may boost consumer prices, and a marked pickup in the headline and core rate of inflation may trigger a bullish reaction in the sterling as market participants scale back bets for the next BoE rate-cut.

Nevertheless, subdued wages accompanied by low input prices may drag on inflation, and another dismal CPI print may weigh on GBP/USD as it puts increased pressure on the BoE to implement another rate-cut in 2016. 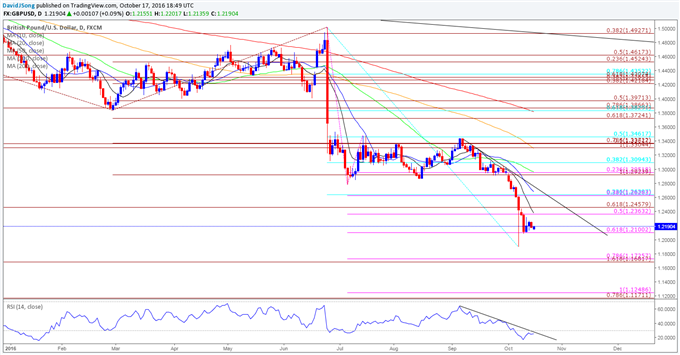 The U.K. Consumer Price Index (CPI) increased an annualized 0.6% for second consecutive month in August, with the core rate of inflation also highlighting a similar dynamic as the figure held steady at 1.3% during the same period. Signs of slowing price growth may encourage the Bank of England (BoE) to further support the real economy, but the central bank appears to be in no rush to push monetary policy into unchartered territory as Governor Mark Carney rules out a zero-interest rate policy (ZIRP) for the U.K. The British Pound struggled to hold its ground following the dismal inflation report, with GBP/USD pushing below the 1.3300 handle to end the day at 1.3187.