- Employment Component has Expanded (Above 50.0) for Last Three-Months.

A rebound in the U.S ISM Non-Manufacturing survey may fuel the near-term strength in the greenback and spark a selloff in EUR/USD should the report boost expectations for a 2016 Fed rate-hike.

It seems as the Federal Open Market Committee (FOMC) is taking a similar path to 2015 as a growing number of officials endorse higher borrowing-costs, and the central bank may continue to take a more collective approach to prepare U.S. households and businesses for a December rate-hike as ‘the Committee judges that the case for an increase in the federal funds rate has strengthened.’ However, market participants may pay increased attention to the 2017-rotation as the three dissenting members from the September interest-rate decision (Esther George, Loretta Mester, and Eric Rosengren) give up their votes, and the decline in the long-run forecast for the federal funds rate may become a key theme in the year ahead as Chair Janet Yellen continues to endorse a ‘gradual’ path in normalizing monetary policy.

Improved confidence along with the expansion in private-sector credit may boost service-based activity, and a marked rebound in the headline figure may put increased pressure on the FOMC to raise the benchmark interest rate later this year especially as the U.S. economy approaches ‘full-employment.’

However, subdued wage growth accompanied by the recent weakness in household consumption may spur another dismal ISM print, and signs of a slowing economic activity may push the Fed to further delay its normalization cycle as the central bank continues to warn ‘market-based measures of inflation compensation remain low; most survey-based measures of longer-term inflation expectations are little changed, on balance, in recent months.’ 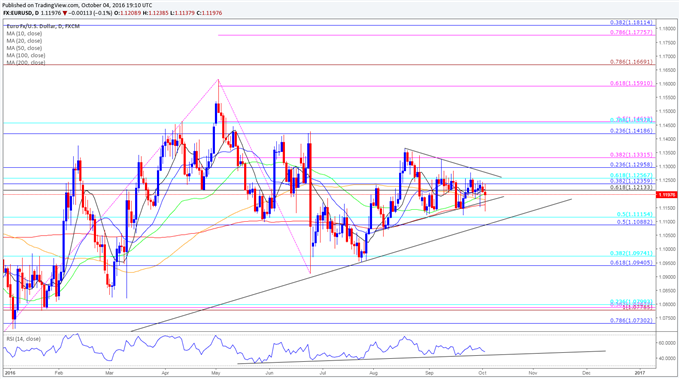 The ISM Non-Manufacturing survey unexpectedly narrowed to 51.4 in August from 55.5 the prior to mark the lowest reading since February 2010. A deeper look at the report showed the gauge for New Orders slipping to 51.4 from 60.3 in July, with the Employment component falling to 50.7 from 51.4, while New Export orders dipped below the 50.0 mark to highlight the first contraction since May. The greenback struggled to hold its ground following the dismal ISM survey, with EUR/USD staging a larger advance later in the day to close at 1.1253.

COT-4th Most Selling by CAD Speculators Since at Least 2002