According to a Bloomberg News survey, all of the 17 economists polled expect the Reserve Bank of New Zealand (RBNZ) to keep the official cash rate at the record-low of 2.00%, but the fresh batch of central bank rhetoric may undermine the resilience in NZD/USD should the central bank cast a dovish outlook for monetary policy.

Why Is This Event Important:Even though the RBNZ sees the real economy‘supported by strong inward migration, construction activity, tourism, and accommodative monetary policy,’ Governor Graeme Wheeler may keep the door open to further embark on the easing-cycle as the central bank warns the ‘current projections and assumptions indicate that further policy easing will be required to ensure that future inflation settles near the middle of the target range.’

Improved confidence paired with the pickup in private-sector consumption may encourage the RBNZ adopt a more upbeat outlook for the region, and a material shift in the monetary policy outlook may heighten the appeal of the higher-yielding currency as market participants scale-back bets for additional monetary support.

However,Governor Wheeler may prepare New Zealand households and businesses for lower borrowing-costs in an effort to combat the ongoing weakness in private wages accompanied by the slowdown in global trade, and the near-term resilience in kiwi may largely unravel should the central bank talk up bets for another rate-cut in 2016. 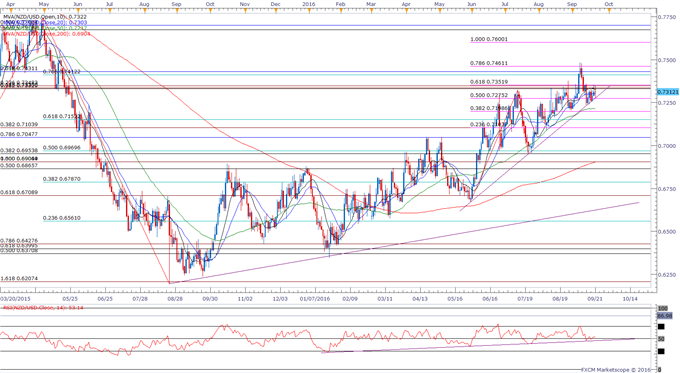 As expected, the Reserve Bank of New Zealand (RBNZ) cut the benchmark interest rate to a fresh record-low of 2.00% in August, with the central bank warning ‘current projections and assumptions indicate that further policy easing will be required to ensure that future inflation settles near the middle of the target range.’ Nevertheless, Governor Graeme Wheeler and Co. went onto say that ‘domestic growth is expected to remain supported by strong inward migration, construction activity, tourism, and accommodative monetary policy,’ and it seems as though the RBNZ will avoid back-to-back rate cuts as the central bank pledges to ‘watch closely the emerging economic data’ coming out of the global economy. NZD/USD spiked higher as the RBNZ curbed bets for a string of rate cuts, but the New Zealand dollar struggled to retain the bulk of the advance as the pair ended the day at 0.7206.

Silver Prices: Triangle Morphs into Larger Version of Itself, Wait for the Break