- Will Fed Officials Curb Their Growth, Inflation and Interest-Rate Forecasts?

Even though the Federal Open Market Committee (FOMC) is expected to remain on the sidelines in September, the fresh batch of central bank rhetoric may foster a near-term sell-off in EUR/USD should the central bank prepare U.S. household and businesses for a late-2016 rate-hike.

Why Is This Event Important:With Fed Funds Futures highlighting a 60% probability for a December rate-hike, the policy statement may boost the appeal of the greenback and reveal a growing dissent within the committee as the central bank appears to be following a similar course to 2015. However, a downward revision in the updated projections (growth, inflation as well as the interest rate dot-plot) is likely to produce headwinds for the greenback as Chair Janet Yellen continues to endorse a ‘gradual’ path in normalizing monetary policy.

Signs of sticky price growth accompanied by the ongoing expansion in the housing market may push the FOMC to endorse a December rate-hike, and the central bank may largely retain its projections for higher borrowing-costs in 2017 especially as the economy approaches ‘full-employment.’ 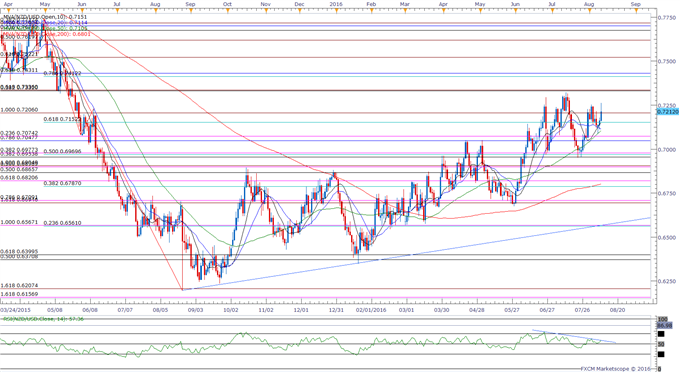 The Federal Open Market Committee (FOMC) voted 9 to 1 to preserve the current policy in July, with Kansas City Fed President Esther George pushing for 25bp rate-hike as ‘the Committee risked eroding the credibility of its policy communications.’ The recent comments suggest the Fed remains in no rush to implement higher borrowing-costs as ‘the risks to the projection for inflation were still judged as weighted to the downside, reflecting the possibility that longer-term inflation expectations may have edged lower,’ and Chair Janet Yellen may continue to endorse a wait-and-see approach at the next quarterly meeting in September as ‘most survey-based measures of longer-run inflation expectations were little changed, on balance, while market-based measures of inflation compensation remained low.’ Despite the limited initial response, the greenback struggled to hold its ground following more of the same from the FOMC, with EUR/USD climbing above the 1.1000 handle to end the day at 1.1056.

Silver Prices: Triangle Morphs into Larger Version of Itself, Wait for the Break