- U.S. Consumer Price Index (CPI) to Pick Up for First Time Since April.

- Core Rate of Inflation to Hold Steady at Annualized 2.2%.

A pickup in the U.S. Consumer Price Index (CPI) may boost the appeal of the greenback and spark a near-term decline in EUR/USD should the report put pressure on the Federal Open Market Committee (FOMC) to raise the benchmark interest rate sooner rather than later.

Even though Fed Governor Lael Brainard remains concerned about undershooting the 2% target for inflation, signs of sticky price growth may spur a greater dissent at the September 21 interest-rate decision especially as the U.S. economy approaches ‘full-employment.’ As a result, Chair Janet Yellen and Co. may follow a similar path to 2015 and show a greater willingness to implement higher borrowing-costs in December, but the central bank may continue to follow a ‘gradual’ approach in normalizing monetary policy as ‘most survey-based measures of longer-run inflation expectations were little changed, on balance, while market-based measures of inflation compensation remained low.’

Rising input costs paired with the expansion in private-sector credit may boost consumer prices, and a marked pickup in price growth may spur a bullish reaction in the greenback as it fuels interest-rate expectations.

Nevertheless, slowing consumption accompanied by signs of a weaker recovery may encourage U.S. firms to offer discounted prices, and a weak CPI report may drag on the greenback as market participants push out bets for the next Fed rate-hike. 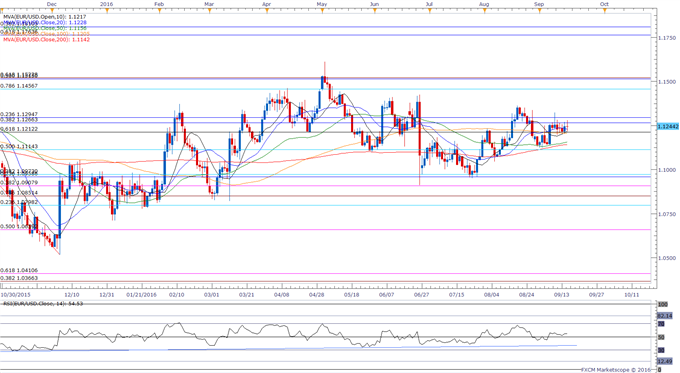 Impact that the U.S. Consumer Price Index has had on EUR/USD during the previous release

The U.S. Consumer Price Index (CPI) increased an annualized 0.8% in July following the 1.0% expansion the month prior, while the core rate of inflation unexpectedly slowed to 2.2% from 2.3% during the same period to mark the first downtick since April. A deeper look at the report showed the weakness was led by a 1.6% decline in energy prices, with transportation costs narrowing 1.1%, while the cost of housing increased another 0.3% following the 0.2% increase in June. The initial spike higher in EUR/USD was short-lived, with the pair coming off of the 1.1300 handle to end the day at 1.1276.