- Will Stronger Growth Push the Reserve Bank of New Zealand (RBNZ) on Keep Rates on Hold?

New Zealand’s 2Q Gross Domestic Product (GDP) report may boost the appeal of the kiwi and spark a near-term rebound in NZD/USD as the economy is projected to expand an annualized 3.6% following the 2.8% rate of growth during the first three-months of 2016.

Why Is This Event Important:Even though the Reserve Bank of New Zealand (RBNZ) endorses a dovish outlook for monetary policy and warns ‘current projections and assumptions indicate that further policy easing will be required to ensure that future inflation settles near the middle of the target range,’ data prints pointing to a stronger recovery may encourage Governor Graeme Wheeler to preserve the current policy at the next interest rate decision on September 22 as it instills an improved outlook for growth and inflation.

The rebound in business outputs accompanied by the pickup in household consumption may generate a larger-than-expected expansion in the growth rate, and a positive development may spark a bullish reaction in the New Zealand dollar as market participants scale back bets for another RBNZ rate-cut.

However, the deterioration in the terms of trade paired with the slowdown in private-sector credit may drag on the growth rate, and a weaker-than-expected GDP print may spark near-term headwinds for kiwi as it drags on interest-rate expectations. 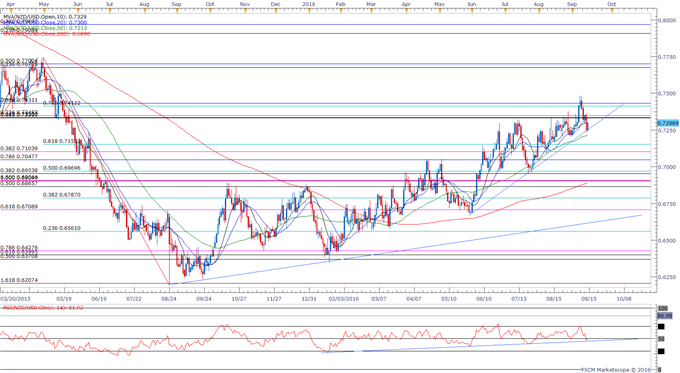 Check out the short-term technical levels that matter for NZD/USD heading into the release!

Economic activity in New Zealand increased an annualized 2.8% following the 2.3% expansion during the last three-months of 2015, and signs of stronger growth may impede on the Reserve Bank of New Zealand’s (RBNZ) easing-cycle even as Governor Graeme Wheeler keeps the door open to further support the real economy. It seems as though the RBNZ will continue to endorse a dovish outlook for monetary policy as the central bank warns ‘further policy easing may be required to ensure that future average inflation settles near the middle of the target range.’ Nevertheless, the bullish reaction in the New Zealand dollar was short-lived, with NZD/USD coming off of the 0.7090 area to end the day at 0.7042.