- Core Inflation to Rebound to Annualized 1.4% Following the Unexpected Slowdown in July.

A pickup in both the headline and core U.K. Consumer Price Index (CPI) may encourage a larger recovery in GBP/USD as the Bank of England (BoE) faces a greater threat of overshooting the 2% target for inflation.

The BoE looks poised to further embark on its easing cycle as ‘a majority of members expect to support a further cut in Bank Rate to its effective lower bound,’ but it seems as though Governor Mark Carney will continue to rule out a zero-interest rate policy (NIRP) for the U.K. as the central bank ‘expects that by the three-year forecast horizon unemployment will have begun to fall back and that much of the economy’s spare capacity will have been re-absorbed, while inflation will be a little above the 2% target.’

The expanding money supply accompanied by the pickup in household earnings may boost U.K. price growth, and signs of stronger-than-expected inflation may trigger a bullish reaction in the sterling as it limits the Monetary Policy Committee’s (MPC) scope to further support the real economy.

Nevertheless, waning business confidence paired with fears of a slowing recovery may drag on consumer prices, and a dismal CPI report may produce headwinds for the British Pound as it puts increased pressure on the BoE to implement more non-standard measures. 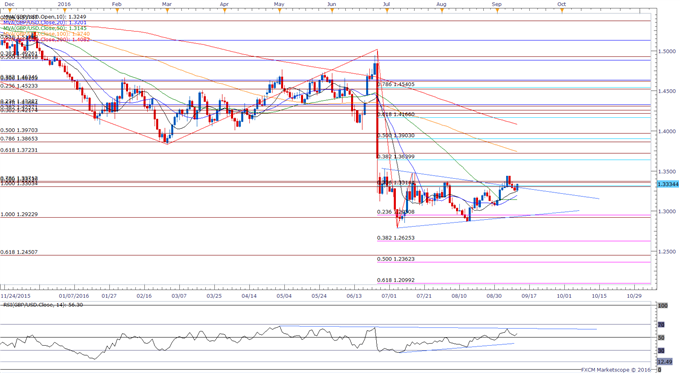 Check out the short-term technical levels that matter for GBP/USDheading into the report!

The U.K. Consumer Price Index (CPI) unexpectedly up ticked to an annualized 0.6% in July from 0.5% the month prior to mark the highest reading since November 2014, while the core rate of inflation slowed to 1.3% from 1.4% during the same period to mark the first decline since April. Even though the Bank of England (BoE) keeps the door open to further embark on its easing cycle, sticky price growth in the U.K. may encourage Governor Mark Carney to keep the benchmark interest rate above zero as the central bank sees a risk of overshooting the 2% inflation-target over the policy horizon. The British Pound tracked higher following the CPI print, with GBP/USD climbing above the 1.2950 zone to end the day at 1.3044.