- Canada Employment to Increase for First Time Since May.

A 14.0K rebound in Canada Employment may derail the near-term rebound in USD/CAD as it highlights an improved outlook for the region and raises the Bank of Canada’s (BoC) scope to retain the current policy throughout the remainder of the year.

Even though the BoC warns ‘risks to the profile for inflation have tilted somewhat to the downside since July,’ a marked rebound in job growth may encourage Governor Stephen Poloz to preserve a wait-and-see approach for monetary policy as the central bank anticipates the economy to ‘strengthen gradually in the second half of this year.’ However, another dismal employment report may push the BoC to adopt a more dovish tone at the next policy meeting on October 19 as officials warn ‘the ground lost over previous months raises the possibility that the profile for economic activity will be somewhat lower than anticipated in July.’

The improvement in the terms of trade paired with the uptick in business confidence may foster a strong job growth report, and a positive development may trigger a bullish reaction in the Canadian dollar as it boosts the outlook for growth and inflation.

However, the larger-than-expected contraction during the second-quarter paired with the slowdown in private-sector consumption may drag on employment, and another unexpected decline in job growth may spur a larger recovery in USD/CAD as it drags on interest-rate expectations. 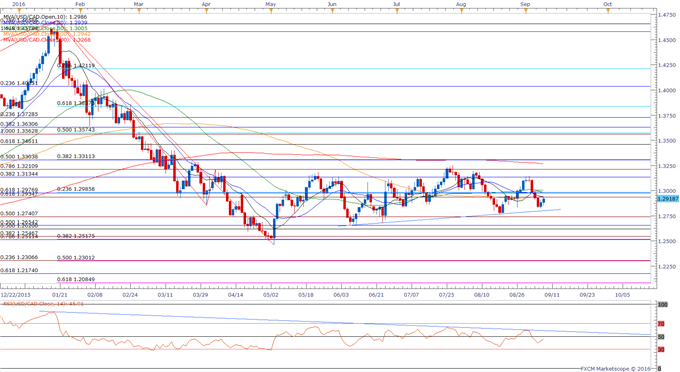 Check out the short-term technical levels that matter for USD/CAD heading into the rate decision!

The Canadian economy unexpectedly shed another 31.2K jobs in July following the 0.7K contraction the month prior, while the jobless rate climbed to an annualized 6.9% from 6.8% during the same period to mark the first uptick since February. A deeper look at the report showed the decline was led by a 71.4K drop in full-time positions, with the labor participation rate narrowing to 65.4% from 65.5%, while part-time employment climbed another 40.2K after rising 39.4K in June. The Canadian dollar sold-off following the dismal report, with USD/CAD climbing above the 1.3100 handle to end the day at 1.3164.