- Will the Governing Council Adjust/Extend the Non-Standard Measures?

Even though the European Central Bank (ECB) is expected to retain the zero-interest rate policy (ZIRP) in September, a string of adjustments to the non-standard measures may trigger a near-term selloff in EUR/USD should the central bank take additional steps to support the monetary union.

The ECB may fine-tune its asset-purchases and extend the duration of its quantitative easing (QE) program as the Governing Council struggles to achieve its one and only mandate for price stability, but the euro-dollar stands at risk of facing a similar reaction to the March 10 policy meeting should President Mario Draghi and Co. endorse a wait-and-see approach for monetary policy.

Signs of weak inflation accompanied by the slowdown in private-sector lending may encourage the ECB to push monetary policy further into unchartered territory, and an adjustment/extension of the non-standard measures may drag on the single-currency amid the ongoing expansion in the central bank’s balance sheet.

Nevertheless, the pickup in consumption paired with the positive developments coming out of the real economy may sway the Governing Council to buy more time, and more of the same from the central bank may spark a bullish reaction in the Euro as market participants scale back bets for additional monetary support. 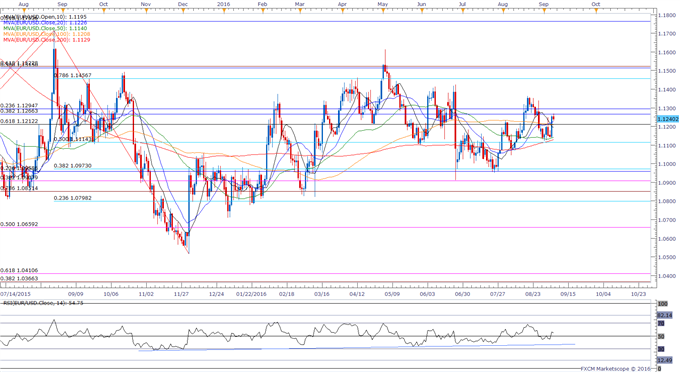 Check out the short-term technical levels that matter for EUR/USD heading into the rate decision!

The European Central Bank (ECB) stuck to the sidelines in July, with the Governing Council preserving the zero-interest rate policy (ZIRP), while the central bank remained committed to carrying out its monthly EUR 80B asset-purchase program until at least March 2017. At the same time, President Mario Draghi kept the door open to further embark on the easing cycle as ‘the risks to the euro area growth outlook remain tilted to the downside,’ and the ECB may continue to push monetary policy into unchartered territory as it struggles to achieve its one and only mandate for price stability. The Euro traded marginally higher following more of the same from the ECB, with EUR/USD coming off of the 1.1000 handle to end the day at 1.1024.