- Will Governor Stephen Poloz Continue to Endorse a Wait-and-See Approach?

The Canadian dollar may extend the advance from the previous week, with USD/CAD at risk of give back the rebound from the August low (1.2763) should the Bank of Canada (BoC) largely endorse a wait-and-see approach for monetary policy.

Even though the BoC anticipates ‘the output gap will close somewhat later than estimated in April,’ Governor Stephen Poloz may show a greater willingness to retain the current policy through the remainder of the year as ‘inflation in Canada is on track to return to 2 percent in 2017 as the complex adjustment underway in Canada’s economy proceeds.’

Sticky price growth accompanied by the pickup in business sentiment may keep the BoC on the sidelines, and more of the same from Governor Poloz and Co. may heighten the appeal of the Canadian dollar as market participants scale back bets for additional monetary support.

However, the economic contraction triggered by the Alberta fires paired with the sharp slowdown in job growth may push the BoC to adopt a more dovish tone for monetary policy, and the loonie may struggle to hold its ground should the central bank show a greater willingness to reestablish its easing cycle. 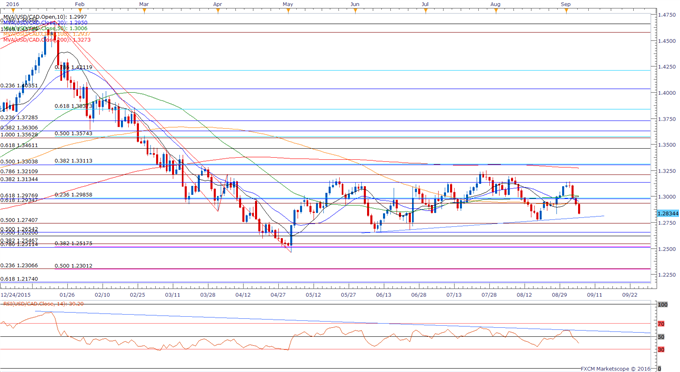 The Bank of Canada (BoC) kept the benchmark interest rate unchanged at 0.50% in July as ‘the fundamentals remain in place for a pickup in growth over the projection horizon,’ with the central bank anticipating ‘above-potential growth from the second half of 2016, lifted by rising US demand and supported by accommodative monetary and financial conditions.’ Even though the BoC warns ‘the output gap will close somewhat later than estimated in April,’ it seems as though Governor Stephen Poloz will continue to endorse a wait-and-see approach for monetary policy as ‘inflation has recently been a little higher than anticipated, largely due to higher consumer energy prices.’ The Canadian dollar gained against its U.S. counterpart following the upbeat tone from the BoC, with USD/CAD slipping below the 1.3000 handle to end the day at 1.2976.