- U.S. Non-Farm Payrolls to Print Below 200K for First Time Since May.

- Average Hourly Earnings to Slow for First Since March.

A 180K expansion in U.S. Non-Farm Payrolls (NFP) accompanied by a downtick in the jobless rate may trigger a near-term decline in EUR/USD as the ongoing improvement in the labor market puts increased pressure on the Federal Open Market Committee (FOMC) to raise the benchmark interest rate sooner rather than later.

The next interest-rate decision on September 21 may reveal a growing dissent within the FOMC as Chair Janet Yellen argues ‘the case for an increase in the federal funds rate has strengthened in recent months,’ but a marked slowdown in Average Hourly Earnings may drag on interest-rate expectations as the committee persistently warns ‘most survey-based measures of longer-run inflation expectations were little changed, on balance, while market-based measures of inflation compensation remained low.’

The pickup in business confidence paired with the resilience in the U.S. housing market may foster a stronger-than-expected NFP report, and a positive development may spark a bullish reaction in the dollar as it boosts bets for an imminent rate-hike.

However, slowing outputs paired with the weakening outlook for global growth may drag on job/wage growth, and a series of dismal data prints may produce near-term headwinds for the greenback as it raises the Fed’s scope to further delay the normalization cycle. 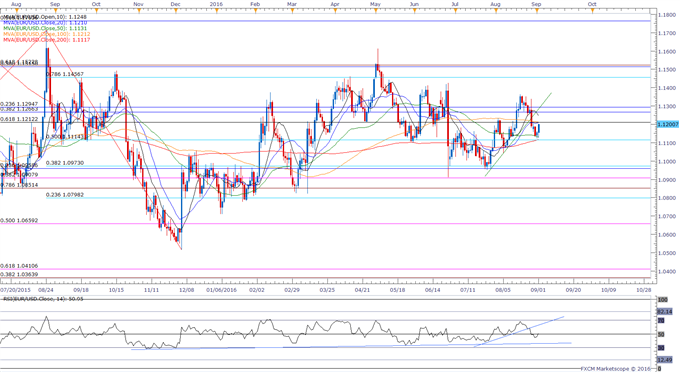 U.S. Non-Farm Payrolls (NFP) increased another 255K in July following the revised 292K expansion the month prior, while the jobless rate held steady at an annualized 4.9% as the Labor Force Participation Rate climbed to 62.8% from 62.7% during the same period. Moreover, Average Hourly Earnings crossed the wires at an annualized 2.6% to mark the fastest pace of growth for 2016, while a separate report showed the U.S. Trade Balance deficit widened to $44.5B from a revised $41.0B in May. The greenback advanced following the better-than-expected print, with EUR/USD slipping below the 1.1100 handle to end the day at 1.1082.