Another downtick in the U.S. ISM Non-Manufacturing survey may halt the recent advance in the greenback and trigger near-term recovery in EUR/USD should the data print dampen expectations for a September Fed rate-hike.

Even though Fed officials have shown a greater willingness to implement higher borrowing-costs following the Economic Symposium in Jackson Hole, Wyoming, the central bank may retain the current policy at the next interest-rate decision on September 21 as ‘most survey-based measures of longer-run inflation expectations were little changed, on balance, while market-based measures of inflation compensation remained low.’ Nevertheless, the Federal Open Market Committee (FOMC) may following a similar path to 2015 and prepare U.S. households and businesses for a December rate-hike as Chair Janet Yellen argues ‘the case for an increase in the federal funds rate has strengthened in recent months.’

Rising costs paired with the subdued outlook for growth may drag on business sentiment, and a dismal developemt may spark a bearish reaction in the U.S. dollar as it raises the risk of seeing the Fed further delay its normalization cycle.

However, the pickup in private-sector consumption, one of the leading drivers of growth and inflation, may lead to an unexpected rebound in the ISM survey, and a better-than-expected figure may fuel the near-term advance in the greenback as it boosts bets for a 2016 Fed rate-hike. 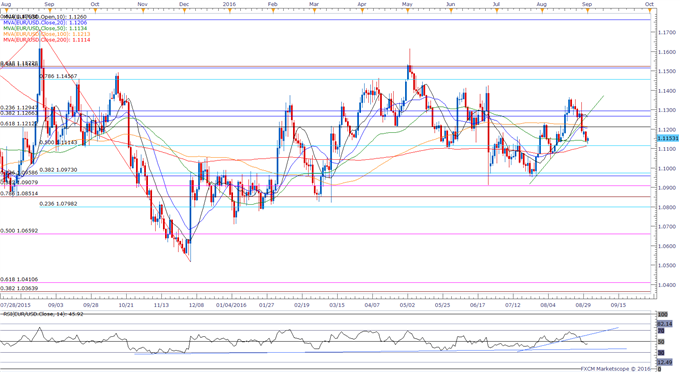 The ISM Manufacturing survey slipped to 52.6 from 53.2 in June, with the employment component narrowing to 49.4 from 50.4 during the same period. At the same time, the gauge for new export orders slowed to 52.5 from 53.5, while measure for New Orders fell to 56.9 from 57.0. The greenback lost ground following the weaker-than-expected report, with EUR/USD climbing above the 1.1170 zone, but the move was short-lived as the pair closed the day at 1.1159.