- Core Rate of Inflation to Hold Steady at for Third Consecutive Month 2.1%.

Despite forecasts for a downtick in Canada’s Consumer Price Index (CPI), stickiness in the core rate of inflation may boost the appeal of the loonie and trigger fresh monthly lows in USD/CAD as it encourages the Bank of Canada (BoC) to gradually move away from its easing cycle.

It seems as though the BoC will retain a wait-and-see approach over the remainder of the year as the Governor Stephen Poloz and Co. argues ‘inflation in Canada is on track to return to 2 percent in 2017 as the complex adjustment underway in Canada’s economy proceeds,’ and the central bank may continue to soft its dovish tone over the coming months as the ‘the risks to the profile for inflation are roughly balanced.’

The pickup in household spending accompanied by the ongoing expansion in the housing market may encourage sticky price growth in Canada, and signs of higher-than-expected inflation may spark a bullish reaction in the Canadian dollar as it boosts interest-rate expectations.

Nevertheless, easing input costs paired with fears of a slowing recovery may drag on consumer prices, and a downtick in both the headline as well as the core CPI print may halt the recent resilience in the Canadian dollar as it fuels speculation for additional monetary support. 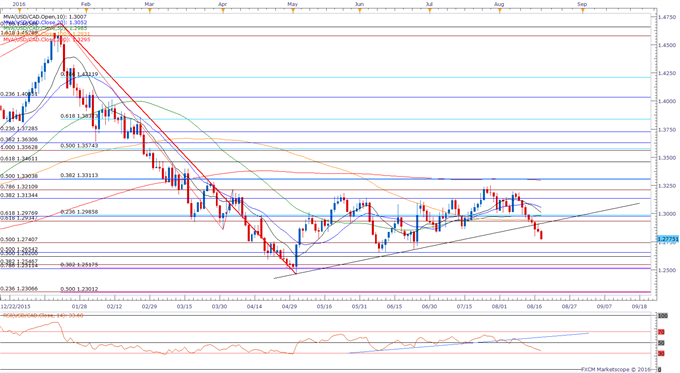 Canada’s Consumer Price Index (CPI) unexpectedly held steady at an annualized 1.5% for the second consecutive month in June, with the core rate of inflation clocking in at an annualized 2.1% amid forecasts for a 2.0% print. A deeper look at the report the stickiness was led by a 4.3% rise in gasoline prices, with transportation costs advancing 1.2% in June, while prices for clothing/footwear narrowed 2.0% after holding flat in May. The initial advance in the Canadian dollar was short-lived, with USD/CAD coming off of 1.3055 to end the day at 1.3121.