A pickup in New Zealand Employment accompanied by a downtick in the jobless rate may foster fresh 2016-highs in NZD/USD as market participants scale back bets of seeing the Reserve Bank of New Zealand (RBNZ) deliver another rate-cut in September.

Why Is This Event Important:With the benchmark interest rate sitting at a record-low of 2.00%, signs of a stronger-than-expected recovery may encourage the RBNZ to endorse a wait-and-see approach at the next policy meeting on September 22, but Governor Graeme Wheeler may keep the door open to implement lower borrowing-costs as the central bank warns ‘current projections and assumptions indicate that further policy easing will be required to ensure that future inflation settles near the middle of the target range.’

The pickup in private-sector spending accompanied by the ongoing expansion in the housing market may encourage New Zealand firms to boost their labor force, and a marked expansion in job growth may ultimately fuel the near-term advance in NZD/USD as it undermines expectations for lower borrowing-costs.

However, waning business confidence paired with the slowdown in global trade may drag on the labor market, and a dismal development may drag on the New Zealand dollar as it fuels bets for the RBNZ to implement back-to-back rate-cuts. 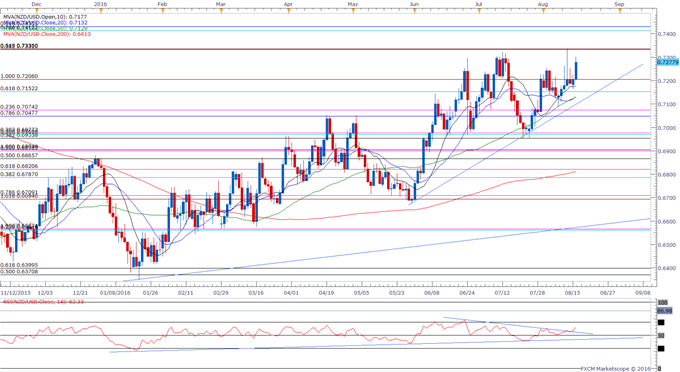 New Zealand 1Q Employment increased an annualized 2.0% following a revised 1.0% expansion during the last three-months of 2015, while the jobless rate jumped to 5.7% from 5.0% as the Participation advanced to 69.0% from a revised 68.3%. Moreover, Private Wages excluding Overtime increased 0.4% in the first-quarter amid forecasts for a 0.3% print, while Average Hourly Earnings advanced 0.3% amid projections for a 0.5% clip. The initial move higher in NZD/USD was short-lived, with NZD/USD coming off of 0.6940 to end the day at 0.6875.