- New Zealand Retail Sales to Pick Up for First Time Since 3Q 2015.

- Will Stronger Consumption Encourage RBNZ to Keep Rates on Hold in September?

A 1.0% expansion in New Zealand 2Q Retail Sales may fuel fresh monthly highs in NZD/USD as signs of a stronger recovery limits the Reserve Bank of New Zealand’s (RBNZ) scope to implement a series of rate-cuts.

After cutting the official cash rate to a fresh record-low of 2.00% in August, it seems as though the RBNZ will continue to embark on its easing cycle over the remainder of the year as the central bank warns ‘current projections and assumptions indicate that further policy easing will be required to ensure that future inflation settles near the middle of the target range,’ but a marked pickup in household consumption may push Governor Graeme Wheeler to the sidelines as it boost the outlook for growth.

The ongoing improvement in New Zealand’s labor market may generate a strong consumption report, and a positive development may spark a bullish reaction in the kiwi as market participants scale back bets for a back-to-back RBNZ rate-cut.

However, waning confidence accompanied by weak wage growth may drag on household spending, and an unexpected slowdown in retail sales may drag on the exchange rate as it fuels speculation for additional monetary support. 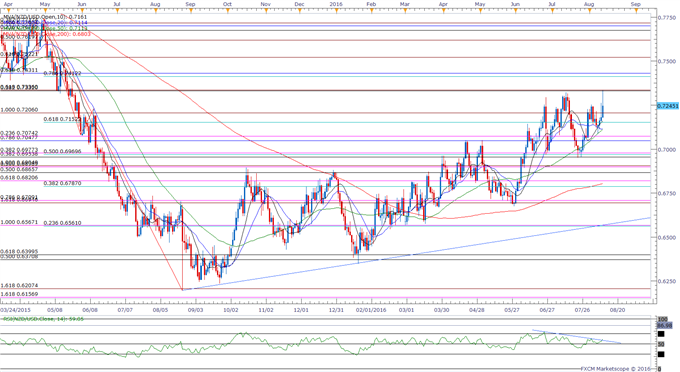 New Zealand retail sales increased 0.8% in the first three-months of 2016 after expanding a revised 1.1% during the previous quarter, with the weaker-than-expected print largely driven by a 3.8% decline in specialized food sales. Moreover, demand for furniture/housewares narrowed 0.3% during the same period, while discretionary spending on clothing/footwear advances 1.7%, with department store sales climbing 0.7%. The New Zealand dollar struggled to hold its ground following the report, with NZD/USD slipping below the 0.6800 handle to end the day at 0.6761.