- U.S. ISM Non-Manufacturing to Pullback From Highest Reading for 2016.

A downtick in the U.S. ISM Non-Manufacturing survey may drag on the greenback and spark a further advance in EUR/USD should the data print dampen expectations for a 2016 Fed rate-hike.

A marked decline in the ISM survey may encourage the Federal Open Market Committee (FOMC) to retain its current policy at the next quarterly policy meeting in September, and signs of a slowing recovery may encourage Fed officials to further delay the normalization cycle as they remain ‘data-dependent.’

Subdued wage growth accompanied by waning household confidence may drag on service-based activity, and a dismal print may produce near-term headwinds for the greenback as market participants push out bets for the next Fed rate-hike.

Nevertheless, the pickup in private-sector consumption, one of the leading drivers of growth, may foster a positive development, and an unexpected uptick in the ISM survey may spur a bullish reaction in the dollar as it puts increased pressure on the FOMC to normalize monetary policy sooner rather than later. 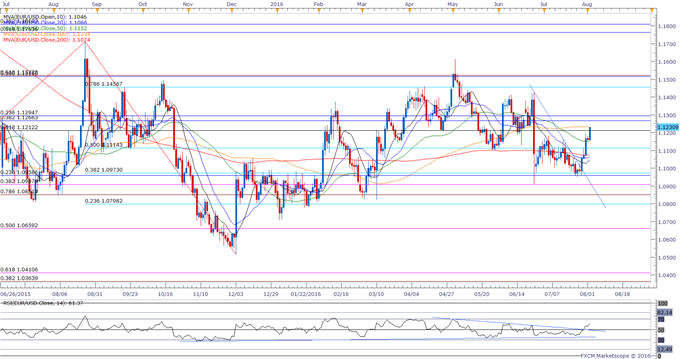 The ISM Non-Manufacturing survey exceeded market expectations in June, with the index climbing to 56.5 from 52.9 in May to mark the highest reading for 2016. A deeper look at the report showed the gauge for New Orders advancing to 59.9 from 54.2 in May, with the Employment component climbing to 52.7 from 49.7, while Backlog of Orders slipped to 47.5 from 50.0 to mark the first contraction for 2016. The initial market reaction to the ISM survey was short-lived, with EUR/USD snapping back from 1.1028 to end the day at 1.1100.