- Will There Be Another Unanimous Vote to Further Delay the Normalization Cycle?

Another unanimous vote by the Federal Open Market Committee (FOMC) to retain the current policy may dampen the appeal of the greenback and spark a near-term advance in EUR/USD as market participants push out bets for the next rate-hike.

Why Is This Event Important:With Fed Funds Futures reflecting limited expectations for higher borrowing-costs in 2016, Chair Janet Yellen and Co. may largely endorse a wait-and-see approach for monetary policy as the central bank argues market-based measures of inflation compensation remains weak while ‘most survey-based measures of longer-term inflation expectations are little changed, on balance, in recent months.’

Subdued wage growth paired with the downtick in household confidence may press the FOMC to further delay its normalization cycle, and more of the same from the central bank may produce headwinds for the greenback as interest-rate expectations falter.

However, sticky prices accompanied by the pickup in private-sector consumption may spur a split decision to retain the current policy, and a growing rift within the central bank may fuel expectations for a 2016 rate-hike as the Fed runs the risk of overshooting the 2% inflation-target over the policy horizon. 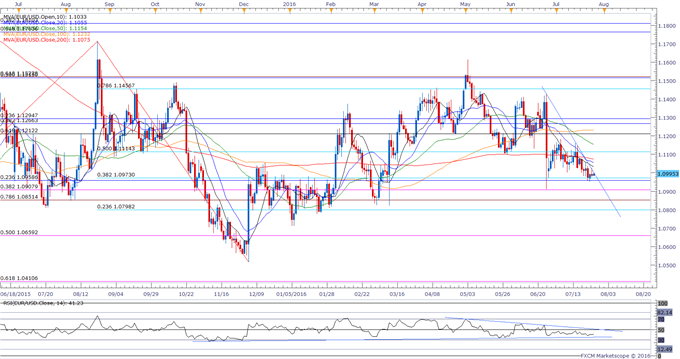 The Federal Open Market Committee (FOMC) voted unanimously to retain its current policy in June as the central bank trimmed its growth forecasts for 2016 and 2017. Nevertheless, Fed officials continued to project two rate-hikes for 2016 as the committee anticipates to achieve the 2% target for inflation over the policy horizon, but Fed Chair Janet Yellen may look to further delay the normalization cycle amid the weakening outlook for the global economy. The greenback edged lower following the rate decision, with EUR/USD coming off of the 1.1250 region to end the day at 1.1259.