According to a Bloomberg News survey 30 of the 54 economists polled forecast the Bank of England (BoE) to reduce the benchmark interest rate to a fresh record-low, and GBP/USD stands at risk of facing additional headwinds over the near to medium-term should the central bank revert back to its easing cycle.

With the U.K. positioned to leave the European Union (EU), the BoE may have little choice but to further support the economy in 2016 as Governor Mark Carney tries to avoid a recession. A material shift in the policy outlook is likely to drag on the sterling as interest-rate expectations falter.

The BoE may take further steps to achieve its dual mandate as the U.K.’s departure from the EU clouds the economic outlook with increased uncertainty, and the Monetary Policy Committee (MPC) may look to enlist more non-standard measures in an effort to mitigate the downside risk for growth and inflation.

Nevertheless, Governor Carney may try to buy more time amid signs of stronger wage growth accompanied by the pickup in private-sector spending, and the British Pound may face a relief rally should the MPC largely endorse a wait-and-see approach for monetary policy. 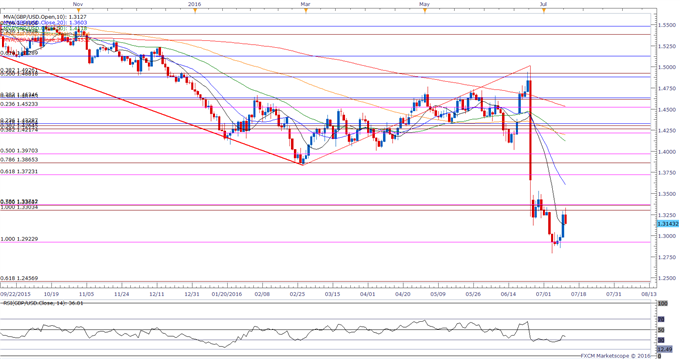 Check out the short-term technical levels that matter for GBP/USD heading into the BoE meeting!

The Bank of England (BoE) voted unanimously in June to keep the benchmark interest at the record-low of 0.50%, while maintaining its asset-purchase program at GBP 375B, but the central bank may have little choice but to reestablish its easing cycle as the Monetary Policy Committee (MPC) sees ‘growing evidence that uncertainty about the referendum is leading to delays to major economic decisions that are costly to reverse.’ With that said, the threat of the U.K. leaving the European Union (EU) may prompt Governor Mark Carney to further support the real economy in an effort to stem the downside risks surrounding the region. Despite the initial move lower in GBP/USD, the market reaction was short-lived, with GBP/USD paring earlier losses to end the day at 1.4202.