Even though the Bank of Canada (BoC) is widely anticipated to keep the benchmark interest rate at 0.50%, the fresh batch of central bank rhetoric may trigger a near-term decline in USD/CAD should Governor Stephen Poloz and Co. endorse a wait-and-see approach for monetary policy.

The BoC may gradually move away from its easing cycle as Prime Minister Justin Trudeau expands the budget to support the real economy, and more of the same from the central bank may boost the appeal of the Canadian dollar as market participants scale back bets for a rate-cut.

The pickup in building activity accompanied by signs of stronger consumption may keep the BoC on the sidelines, and the loonie may catch a bid following the rate-decision should Governor Poloz highlight a neutral outlook for monetary policy.

However, easing price pressures paired with the renewed weakness in employment may push the BoC to adopt a more dovish tone for monetary policy, and the Canadian dollar may face near-term headwinds should the central bank show a greater willingness to further embark on its easing cycle. 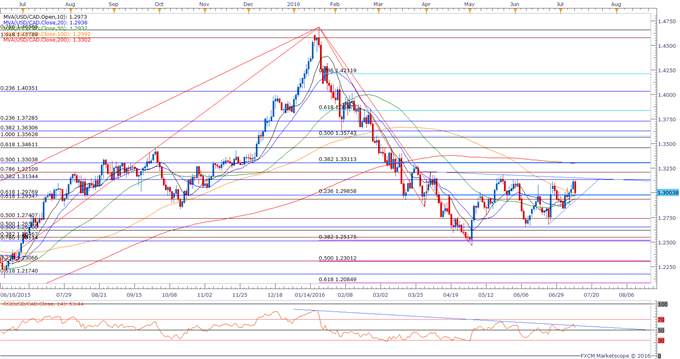 As expected, the Bank of Canada (BoC) retained its current policy in May, with the central bank largely endorsing an upbeat outlook for the region as the economy is expected to ‘return to solid growth in 2016.’ Moreover, the BoC argued that ‘inflation is roughly in line with the Bank’s expectations’ even as the economy adjusts to the oil price shock, and it seems as though Governor Stephen Poloz and Co. will largely endorsee a wait-and-see approach throughout 2016 as the risks to the ‘inflation projection remain roughly balanced.’ The Canadian dollar gained ground following the rate-decision, with USD/CAD slipping below the 1.3050 area to end the day at 1.3017.