- Core Rate of Inflation to Narrow for Second Time in 2016.

A slowdown in Canada’s headline & core Consumer Price Index (CPI) may drag on the loonie and fuel the near-term advance in USD/CAD as it puts pressure on the Bank of Canada (BoC) to further support the real economy.

Even though BoC Governor Stephen Poloz sticks to the sidelines in 2016 and largely endorse a wait-and-see approach for monetary policy, the central bank may revert back to its easing cycle in an effort to encourage a stronger recovery.

The slowdown in private-sector consumption along with subdued input prices may push Canadian firms to offer discounted prices, and a weak inflation print may produce short-term headwinds for the loonie as market participants adjust their outlook for monetary policy.

However, sticky home prices accompanied by the ongoing improvement in the labor market may boost consumer prices, and a stronger-than-expected CPI report may heighten the appeal of the Canadian dollar as it raises the BoC’s scope to move away from its easing cycle. 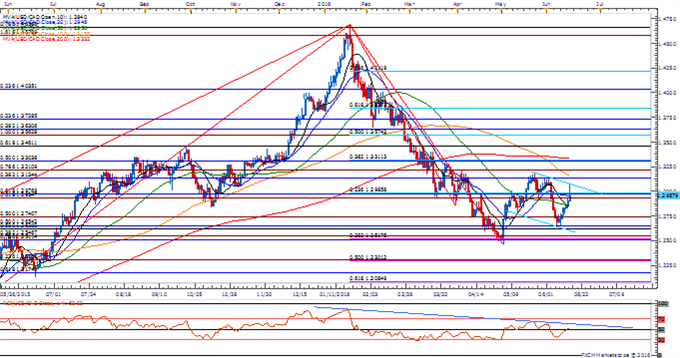 Canada’s Consumer Price Index (CPI) climbed an annualized 1.7% in April following the 1.3% expansion the month prior, while the core rate of inflation unexpectedly advanced 2.2% during the same period amid forecasts for a 2.0% print. A deeper look at the report showed transportation costs increased 2.0% as energy prices climbed 3.8%, while prices for clothing and footwear held flat in April, with food costs falling 0.5% following a 0.3% contraction in March. Despite the stronger-than-expected CPI report, the Canadian dollar struggled to hold its ground, with USD/CAD climbing back above the 1.3100 handle to end the day at 1.3107.

S&P 500: Confluence of Technical Events Bolsters Case for the Bears