According to a Bloomberg News survey, 10 of the 17 economists polled anticipate the Reserve Bank of New Zealand (RBNZ) to retain its current policy in June, but more of the same from Governor Graeme Wheeler and Co. may encourage a further recovery in NZD/USD should the central bank largely endorse a wait-and-see approach for monetary policy.

Why Is This Event Important:Even though the RBNZ keeps the door open to further support the real economy, a less-dovish policy statement may boost the appeal of the New Zealand dollar as market participants scale back speculation for lower borrowing-costs.

The improvement in the terms of trade accompanied by the ongoing improvement in the labor market may encourage Governor Wheeler to adopt an improved outlook for the region, and the fresh batch of central bank rhetoric may spark a bullish reaction in the New Zealand dollar should the RBNZ talk down expectations for an imminent rate-cut.

However, subdued wage growth paired with the slowdown in household consumption may dampen the outlook for growth and inflation, and the kiwi stands at risk of facing near-term headwinds should the RBNZ show a greater willingness to further embark on its easing cycle. 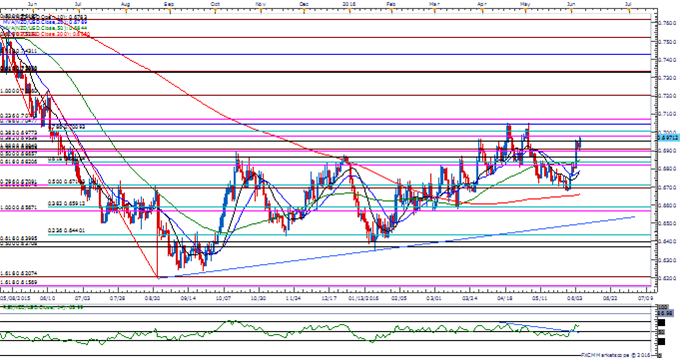 As expected, the Reserve Bank of New Zealand (RBNZ) retain its current policy in April, with the central bank keeping the benchmark interest rate at 2.25%, but kept the door open to further support the real economy as Governor Graeme Wheeler and Co. argued ‘further policy easing may be required to ensure that future average inflation settles near the middle of the target range.’ Moreover, the RBNZ warned ‘the outlook for global growth has deteriorated over recent months due to weaker growth in China and other emerging markets,’ and the central bank may further embark on its easing cycle over the coming months in an effort to insulate the region from the slowdown in the world economy. Nevertheless, NZD/USD climbed above the 0.6900 handle following the rate-decision, with the New Zealand dollar gaining ground throughout the day as the pair closed at 0.6956.