- Reserve Bank of Australia (RBA) to Keep Official Cash Rate at Record-Low of 1.75%.

According to a Bloomberg News survey, 25 of the 26 economists polled forecast the Reserve Bank of Australia (RBA) to keep the benchmark interest rate at the record-low of 1.75%, but the fresh batch of central bank rhetoric may prop up the Australian dollar and generate a larger rebound in AUD/USD should Governor Glenn Stevens and Co. soft their dovish outlook for monetary policy.

The RBA may largely endorse a wait-and-see approach over the remain of 2016 after cutting the Official Cash Rate (OCR) to a fresh record-low of 1.75% in May, and a shift in the policy outlook may prop up the aussie over the near to medium-term should the central bank show a greater willingness to gradually move away from its easing cycle.

Signs of a stronger-than-expected recovery accompanied by the improvement in the terms of trade may encourage the RBA to adopt a more upbeat outlook for the region, and the Australian dollar may face a bullish reaction should the central bank talk down bets for lower borrowing-costs.

Nevertheless, the slowdown in private-sector consumption paired with the contraction in business investment may force Governor Stevens to further support the rebalancing of the real economy, and the higher-yielding currency may face near-term headwinds should the central bank keep the door open to further embark on its easing cycle. 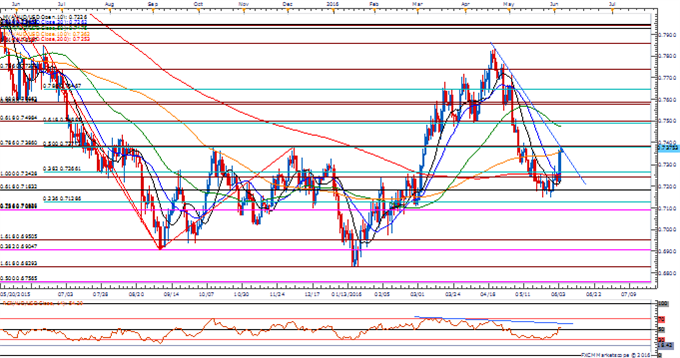 The Reserve Bank of Australia (RBA) unexpectedly cut the Official Cash Rate (OCR) to a fresh record-low of 1.75% in May, with Governor Glenn Stevens and Co. arguing that ‘the inflation outlook provided scope for a further easing in monetary policy’ as the central bank curbs its outlook for inflation. Moreover, the RBA warned ‘employment growth has slowed from the strong pace of last year and leading indicators of employment have been somewhat mixed of late,’ and the central bank may further embark on its easing cycle in 2016 in an effort to further assist with the rebalancing of the real economy. The Australian dollar slipped below the 0.7600 handle following the RBA rate-cut, with AUD/USD extending the decline throughout the day as it closed at 0.7483.