The European Central Bank (ECB) interest rate decision may fail to generate a meaningful market reaction as the Governing Council is widely anticipated to retain the zero-interest rate policy (ZIRP) in June, but the fresh batch of central bank rhetoric may drag on EUR/USD should President Mario Draghi and Co. keep the door open to implement more non-standard measures.

Why Is This Event Important:The Euro may struggle to hold its ground should the ECB show a greater willingness to further embark on its easing cycle, but the single-currency may catch a bid if the Governing Council largely endorses a wait-and-see approach all the while the monetary union returns to its historical role as a net-creditor to the rest of the world.

The slowdown in private-sector lending accompanied by signs of a weaker-than-expected recovery may encourage the ECB to endorse a highlight dovish outlook for monetary policy, and a greater willingness to further support the euro-area may spur headwinds for the single-currency as market participants boost bets for more non-standard measures.

Nevertheless, sticky price growth paired with the improvement in the Balance of Payment (BoP) may prompt the Governing Council to adopt an improved outlook for the monetary union, and a less-dovish policy statement may generate a bullish reaction in the Euro amid waning expectations for additional monetary support. 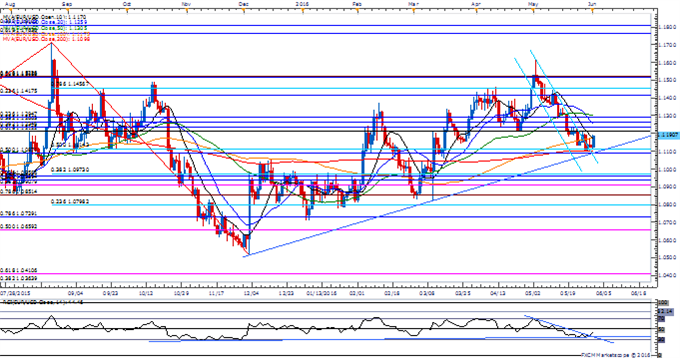 Check out the short-term technical levels that matter for EUR/USD heading into the rate decision!

The European Central Bank (ECB) retained the zero-interest rate policy (ZIRP) in April, with President Mario Draghi largely endorsing a dovish outlook for monetary policy as the central bank head argued rates may ‘remain at present or lower levels for an extended period of time.’ Moreover, the Governing Council warned inflation may turn ‘negative’ in coming months as ‘risks to the euro area growth outlook still remain tilted to the downside,’ and the central bank may implement more non-standard measures in 2016 as it struggles to achieve its one and only mandate for price stability. The initial advance in EURUSD was short-lived, with the pair slipping back below the 1.1350 region to end the day at 1.1286.

US DOLLAR Technical Analysis: Another Monthly Opening Range Worth Watching